In less than three weeks bidding will close in the Goldin Auctions April 5 Auction, and nearly 850 items of sports, entertainment and historical memorabilia, including one of the highest graded editions of the 1909 T206 Honus Wagner card in existence, will have new owners. Bidding on The Wagner, graded EX 5 (MC) by PSA has reached $1.175 million*. (*includes 10% buyer’s premium)

“With less than 50 authenticated Wagner cards out there, the opportunity to purchase one does not come around very often and it is obvious from the 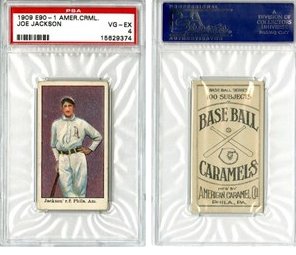 response since our auction went live less than two weeks ago, there is quite a demand for this card from serious collectors,” said Ken Goldin, Founder of Goldin Auctions. “The fact that this Wagner carries a grade of EX 5 by PSA puts it in a class with just two others that have ever been graded. The day has arrived for someone new to lay claim to this investment grade piece of baseball and American history.”

Here are a few other highlights from the Goldin Auction closing on April 5 (not including buyer’s premium). For more information or to register for a free catalog, visit www.GoldinAuctions.com.

About The Wagner
Issued by the American Tobacco Company, from 1909-11 as part of the T206 series, less than 200 Wagner cards were ever issued. Production of the card was halted after Wagner, the Pittsburgh Pirates star shortstop, requested the tobacco company to stop including his image in the cigarette packs. As a result, there have been less than 50 authentic Wagner cards submitted for authentication and/or grading by the major card grading companies. Based upon the current environment and historical price increases, it is possible for this sale to set a new overall record price for The Wagner. In 2012, a Wagner graded VG 3 sold for over $1.2 million – a 76% increase over what another VG 3 Wagner sold for just four years earlier. The only known public sale of an EX 5 Wagner was, for this card in 2008, for $1.62 million.