A Joe DiMaggio game-used, autographed, photo-matched bat is up for bid in the Lelands Spring Classic Auction has now been identified with probable use in the 1949 World Series. This is the first DiMaggio photo-matched bat from his playing days to ever be offered in a public auction.

Two newly discovered photos, plus independent attribution that the bat was used in the 1949 and 1950 seasons, lead experts at Lelands to believe that there is a high probability that this same bat was used in the ’49 series featuring the Yankees versus the Brooklyn Dodgers.

Of the two photos, one is a possible match to Joe DiMaggio’s locker on October 10th, 1949, the day after the final game of the World Series. In this locker room photo, similar lines are running through the top of DiMaggio’s nameplate on the barrel. The second photo shows the Yankee batboy holding the bat while congratulating DiMaggio at home plate following his home run in Game 5. 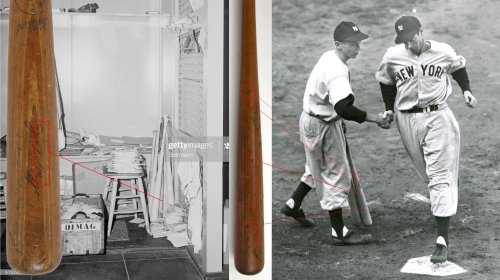 More evidence that points to the bat being used in the ’49 series is that prior to the definitive match to September 28, 1949 was found, PSA had originally authenticated the bat as being used by DiMaggio during the 1950 season. Neither of these matches are conclusive enough for a guarantee at this point but given the two possible matches and definitive attribution to both the 1949 and 1950 seasons, it is a strong possibility that Joe DiMaggio used the bat during the 1949 World Series.

This news hits with just days left to bid. Lelands is the auction house of choice for many of the greatest collections in hobby history. Lelands 2020 Spring Classic Auction is set to close on Friday, June 19, 2020.