The Los Angeles Rams and Goldin today announced a multi-year partnership to bring Rams memorabilia to Goldin’s sports collectible catalogs and exclusive VIP experiences to fans. As a Proud Partner of the Rams, Goldin will receive game balls, game-worn jerseys, pairs of game-used gloves and other equipment to be auctioned following Rams preseason and regular season games. Goldin’s first auction to include Rams items will open on December 9, 2021.

Goldin and the Rams also will create exclusive VIP experiences that include a fantasy football draft party featuring Rams Legends in the Draft room at the team’s training facility, access to a suite for a Rams home game at SoFi Stadium with appearances from Rams Legends and much more.

“We are honored to be working with the Rams to offer fans access to exclusive experiences and valuable pieces of Rams history,” said Sam Farber, Head of Business Development and Partnerships at Goldin. “The Rams are constantly providing the best to their fans, and we could not be more proud to help provide a new way to engage with their passionate fans.”

To kickoff the first year of the partnership, fans will be able to bid on a lunch with Rams Legends in a suite at SoFi Stadium during the week. For each year of the deal, the Rams and Goldin will coordinate two golf outings and lunches with Rams Legends as well as meet-and-greet opportunities with current Rams players.

“We are thrilled to team up with Goldin and provide our fans with opportunities to bid on game-worn gear and once-in-a-lifetime experiences with some of our current and former players,” said Jason Griffiths, Rams Vice President of Partnership Sales. “With the support of Goldin, we will be able to enhance our fan engagement by getting collectibles and other Rams memorabilia in the hands of fans and sports enthusiasts around the globe.”

Additionally for each season, Goldin will auction off a VIP Gameday Experience for a Rams gameday that will include VIP Tailgate passes, an exclusive tour of the stadium, and a post-game photo opportunity on the field. 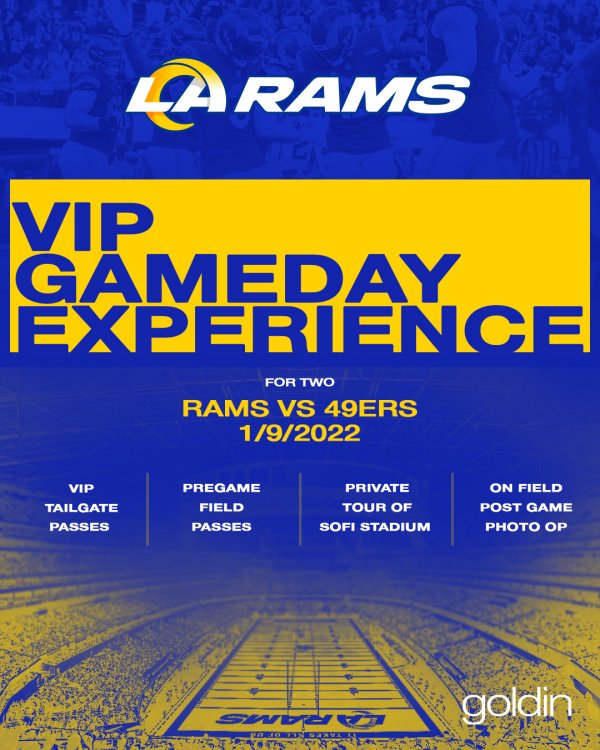 The First-Ever Fractional Auction Lot Available in The MINT25 Auction