The Lou Gehrig Signed New York Yankees Uniform Players Contract from 1925, which fetched a high bid of $197,287.48, was the top seller in Steiner Auctions’ “Fall Classic” on-line auction which concluded on Saturday (November 18). The Aaron Judge Game Used No. 99 Home Uniform Jersey from September 30, 2017 when he broke Babe Ruth’s 96-year record for most Home Runs at Yankee Stadium was second with a final bid of $90,676.95.  More than $1.25 million was bid on 952 pieces of memorabilia. 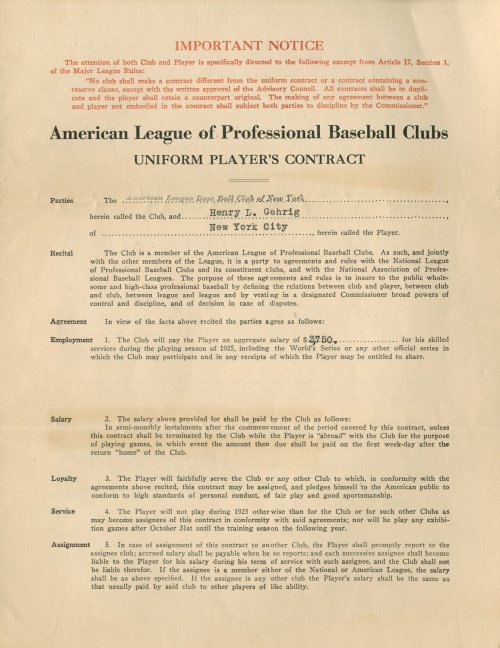 An Official American League baseball signed by Babe Ruth inscribed to “Troop 6 Larchmont Boy Scouts from Babe Ruth” went for $9,093.18, with a generous portion of the final sales price to be donated to the Boy Scouts by consigner Jack Coughlin of Larchmont.

Gehrig Contract Description: The first page of the 92-year old artifact reads “American League of Professional Baseball Clubs Uniform Players Contract” and features the player’s name, Henry L. Gehrig of “New York City” typed on the front of the artifact. The interior of the artifact features a signature of Jacob Ruppert that was executed by Ed Barrow, the President of the New York Yankees.

For those interested in selling memorabilia, Steiner Auctions is currently seeking collectibles valued at $1,000 or more. To sell your items in Steiner Auctions please call 914-307-1058 or email auction@steinersports.com.