Love of the Game Auctions, an internet-based sports auction house catering to the passionate collector of cards and memorabilia, announced today that its Fall, 2019 auction is now open for bidding.  The auction closing date is Saturday, November 30, 2019.  Bid, register and view the auction at loveofthegameauctions.com/catalog.aspx.

The sale features the company’s strongest selection of sports cards and memorabilia in its history, and is highlighted by one of the most historically important pieces of sports memorabilia it has ever handled: An exceedingly rare and beautiful 1912 Ty Cobb T202 Hassan Triple Folder Advertising Display.  One of just three known examples, this piece is a relatively new discovery, and the first example to make it to the auction block in 13 years.  The last known sale of a Cobb advertising display was a $59,000 sale in 2006.

Also featured is a rare, fresh-to-the-hobby multi-signed baseball with both Christy Mathewson and Walter Johnson.  Authenticated by PSA/DNA, the baseball likely dates to Spring Training of 1925, when all but one of the baseball’s 14 signatories are confirmed to have been in the Tampa area on the same March weekend.  Within a few weeks, Mathewson had returned to his home in Saranac, NY to nurse the illness to which he would ultimately succumb; this is likely one of the last baseballs he signed.

Another featured item is a gorgeous 1914 Cracker Jack #103 Joe Jackson.  Consigned by a noncollecting family, the card has an interesting backstory.  Found among a small box of items belonging to a young boy who passed away in the early 1920s.  His family kept the belongings and passed them down over generations, until finally agreeing to sell the card.  Though the card has been graded GOOD 2 by PSA, the eye appeal is quite strong, with a few tiny indentations and punctures resulting in the lower numerical grade. 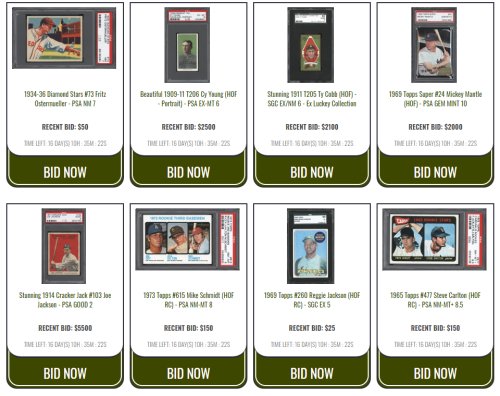 Keeping with Love of the Game’s tradition of offering unusual, seldom-seen items, the auction also includes a complete 1909 E95 American Caramel set.  The cards are beautiful, sharp, and unblemished, each card carrying a grade of AUTHENTIC due to having been cut from an uncut sheet.  The 25 pristine cards likely make up the finest E95 set in existence.

The auction also features a beautiful, complete, high-grade 1969 Topps Super set, entirely graded by PSA and ranked #8 on the Set Registry.  As if that wasn’t enough, the winning bidder can upgrade their set even further by taking advantage of a separately-offered example of the Mickey Mantle card, graded a perfect GEM MINT 10 by PSA.  The card is one of just ten examples to have attained that grade, and this is the first example to have hit the auction block since 2008.

In addition to the Hassan Triple Folder Advertising Display, the auction features a large assortment of other cards and memorabilia items related to Ty Cobb.  Lot #5 features a beautiful 1907 Detroit Tigers Imperial Cabinet Photo with a rookie Ty Cobb, a large-format example of the familiar team photo.  A similar image is also found on lot #250, a 1907 Tigers real-photo team postcard, encapsulated by PSA.

Later-period Cobb cards include beautiful PSA-Graded T206 Green, Red, and “Bat On Shoulder” varieties, along with both high and midgrade examples of his gorgeous T205 portrait.  Elsewhere in the auction, Cobb is featured on E90-1, E103, T201, and B18 Blanket cards.

The auction also marks the second installment of the sale of the Ted Patterson Collection.  The noted Baltimore-area sportscaster assembled a world-class collection of memorabilia and cards, and this auction features a host of tough-to-find advertising display pieces.  Noteworthy items include a rare 1950s Yoo-Hoo Cardboard Advertising Display featuring Mickey Mantle and Yogi Berra (Lot #20) in its original cardboard frame.

The auction features an interesting selection of football items, including a complete set of 1946 Cleveland Browns Sears cards, all graded by PSA (Lot #622).  The set includes the true rookie of Hall of Fame quarterback Otto Graham.  In addition to a number of other high-grade, PSA-graded Hall of Fame rookie cards, the auction features 40 lots of vintage football memorabilia, from 19th Century college football scorecards and programs to early NFL and AAFC Championship programs.

The auction includes a number of beautiful complete sets and near-sets.  In addition to the gorgeous 1969 Topps Super set graded above, completists can find a full, newly-graded 1929-30 Exhibit Four-On-One set (lot #480), a spectacular 1958 Hires Root Beer complete set with tabs (lot #575), and gorgeous higher-grade 1960s and 1970s Topps baseball sets that include an amazing 1962 Topps Master set, gorgeous 1963 and 1967 Topps sets, and a 1963 Topps set with 189 graded cards.  Virtually all the complete 1960s sets were assembled by a meticulous collector who continuously upgraded his cards by purchasing large lots and choosing the best examples; the cards are truly wonderful, sharp and clean examples.

Keeping in line with Love of the Game auctions’ specialties, the sale features a large selection of 19th and early 20th Century cards and memorabilia, a host of seldom-seen or unique items, an exceptional grouping of tough postcards, and a number of seldom-seen vintage baseball photos.  One of the company’s finest auctions yet, Love of the Game continues to build its reputation as an auction house for unusual items that you don’t see every day.

The final date to bid is Saturday, November 30.  To register for the auction and review the selection online, visit http://www.loveofthegameauctions.com.

Love of the Game is in the process of assembling its Spring, 2020 catalog auction, which they hope will prove to be its biggest and most exciting auction yet.  For more information, or to consign your valuable material, contact Love of the Game at info@loveofthegameauctions.com or (845) 750-6366..

The auction closes Saturday, November 30, 2019. Bid, register and view the auction at loveofthegameauctions.com/catalog.aspx. 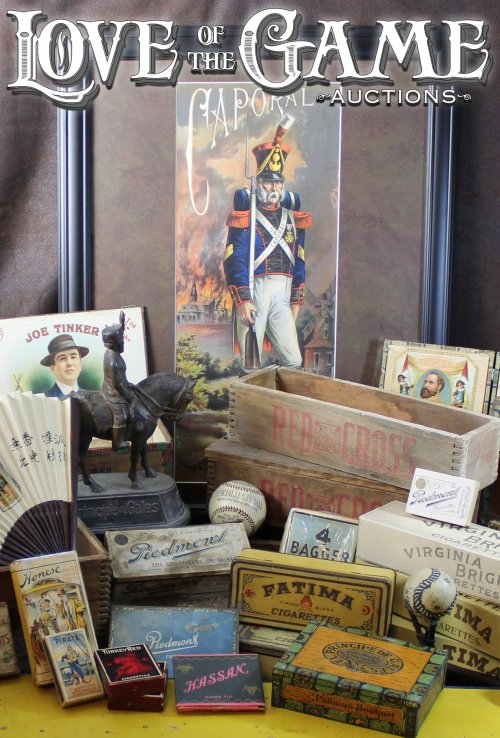 Love of the Game is in the process of assembling its Spring, 2020 catalog auction, which they hope will prove to be its biggest and most exciting auction yet.  For more information, or to consign your valuable material, contact:

Please note that we have moved to the historic city of Kingston, NY. The city dates back to the 1600s!