When picking a name that speaks to the term “baseball legend,” Lou Gehrig is a common choice. Similarly, when choosing a preferred store-behind-the-door self-defense, weapon, a baseball bat frequently serves as a homeowner’s choice. But when a Gehrig game-used bat surfaces in the sports memorabilia hobby – particularly one that for decades did, indeed, sit just inside its owner’s front door for peace of mind – there is nothing ordinary about it.

Great Meadows-based Love of the Game Auctions (LOTG) today announced it has procured a game-used Gehrig bat that will be featured in its Summer 2015 auction. It is one of fewer than 20 known examples, according to PSA ProBatFacts. As such, this PSA/DNA-certified 1929-31 Hanna Batrite R2 measuring 35.5 inches and 37.5 ounces, graded GU 8.5, represents a rare, historically significant piece that already is garnering significant attention.

“This bat was given to the consignor decades ago by a family member of a former Yankee Stadium groundskeeper,” said LOTG’s Al Crisafulli, president of the internet-based sports auction house. “Though the consignor is a Yankee fan, the family is not a baseball family, and without knowledge of the bat’s value it was kept behind the front door for protection – for 30 years.”

Crisafulli added that the bat was nearly left behind during a move in the early 2000s, and a few years later was almost given to a neighborhood child who liked to play ball. “Really, it is amazing that this outstanding piece of memorabilia made it this far, and its history certainly adds color to the story. All that aside, it is gorgeous. It is important. And it is among the most exciting consignments with which an auction house can be entrusted.” 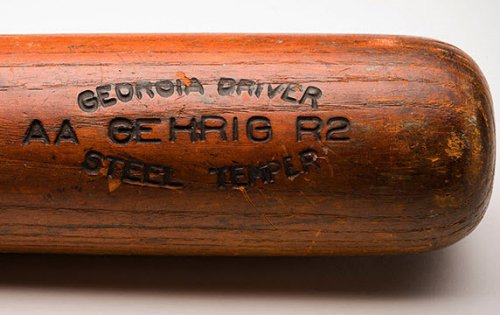 Henry Louis Gehrig (1903-1941), a New York Yankees great, is recognized as one of the game’s most dominant hitters. Also known as The Iron Horse due to his then-record 2,130 consecutive games played, he held the franchise record for the most hits – 2,721 – until Derek Jeter tied it in 2009 (at which point the LOTG consignor considered sending the bat to Jeter as a congratulatory gift in the hopes of scoring some free Yankees tickets). His game-used bats rank among the hobby’s five most desirable for collectors, according to PSA, sharing that distinction with Babe Ruth, Ty Cobb, Ted Williams and Jackie Robinson.

According to Crisafulli, early word of the consignment has been met with strong enthusiasm. “Beyond its significant value, this is the kind of item that makes baseball fans of all ages feel like kids again,” he said. “Everyone wants to hold this bat – which once belonged to a true American sports legend.”

LOTG’s summer auction will open in late July and run through early August. Crisafulli added that the Gehrig bat will share the spotlight with a growing – and impressive – lineup of featured items including a beautiful 1909-11 T206 near set, a 1952 Topps Mickey Mantle graded PSA EX 5, a beautiful selection of higher-grade N173 Old Judge Hall of Famer cabinet cards, and much, much more. For more information, visit www.loveofthegameauctions.com.