Love of the Game Auctions is just a few weeks away from our Spring, 2015 Premium Catalog Auction, and we thought we’d whet your appetite with some of the spectacular items that we’ll be featuring in the auction. 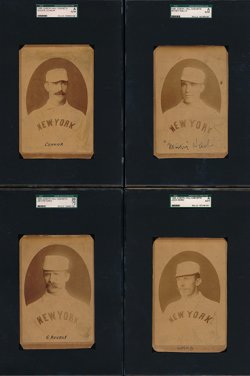 Thought to be one of a kind, each of these cabinets were part of a group of 18 cabinets that were sold at auction in 2006 for more than $70,000. After that initial sale, the cards were broken up and scattered throughout the hobby.

These cards represent four of the five Hall of Famers in that initial group, and the largest single group of cards from this issue to be sold publicly in one place since. Among the most rare of all 19th Century cards, only several individual examples have changed hands over the last decade.

The words “Oscar Charleston Signature” are simply not three words that are often seen together in the hobby. During the process of authenticating this signed ledger sheet, it was remarked to us by more than one expert that there may be fewer than 20 authentic Charleston signatures known to exist.

This ledger sheet documents a 1950 game between the Birmingham Black Barons and the Philadelphia Stars. The sheet has been signed boldly in graphite pencil by Charleston on the “Paid Visitors” line.

This unbelievably rare and historically significant document has also been signed by Joe Atkins, the secretary of the Black Barons, and comes with full LOA from James Spence Authentication. 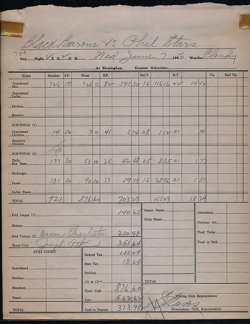 Likely dating to Spring Training of 1910 in Hot Springs, Arkansas, the quality of this image is stunning. Originally featured as part of the sale of items related to Wagner’s estate in the early 2000s, the item was obtained by our consignor where it has remained a treasured part of his collection. With the photo remaining in outstanding condition and the mount exhibiting minimal wear, this is a splendid memento of a core group of players that included two future Hall of Famers and one of the game’s early stars, originating from the estate of one of the most beloved – and highly collected – players ever to take the field.

Auction Closes March 28!
The auction is slated to open in early March, with catalogs mailing around March 9. Be sure to visit our blog between now and then, for more updates on the rare cards, memorabilia, and autographs we will be featuring in this exciting auction.

Consignments Wanted!
We have already begun the process of gathering consignments for our June Set Builder’s Auction as well as our Summer Premier Catalog Auction. If you have material that you’re even considering selling, now is the best time to reach out. Consigning early to a Love of the Game Auction provides you with the best consignment terms, including NO FEES, guaranteed marketing and advertising support, and other cash incentives.

Any consignment valued at $50,000 or more (single or multiple items) confirmed for our Summer Premier Catalog Auction by February 28, will receive NO FEES plus 7% of the buyer’s premium!