Love of the Games an internet-based sports auction house catering to the passionate collector of cards and memorabilia, offers its Summer 2022 auction.   Bidding will run thru August 20, 2022. As is our custom, we are thrilled to invite you to view our interactive catalog, or bid, view and register for the auction at loveofthegameauctions.com. This auction features cards and memorabilia from 1900 through 1965, along with including Hall of Fame rookie cards, complete sets, prewar rarities and unopened material.

The auction highlight is the sale of the #2 Roberto Clemente Master Set on the PSA Set Registry.  Compiled over several years, the majority of the set is being offered as individual lots in the auction.

“The Clemente set is really amazing in how thorough it is,” said Auction Director Al Crisafulli. “The consignor built it over a number of years, and really emphasized completion.  The entire Clemente Master Set numbers 260 cards, and a lot of them are really tough to find.  This set sits at nearly 85% complete with a weighted GPA of 6.17, and includes most of the really scarce ones.  It’s a testament to his diligence, and his persistence at hunting down some really incredible cards.  We’re thrilled to offer it.”

As is the case with most Love of the Game auctions, the auction features a large assortment of cards, with a heavy focus on prewar baseball.  The 19th Century section is one of the company’s strongest, highlighted by a beautiful 1888 N173 Old Judge cabinet of Hall of Famer King Kelly, graded VG-EX 4 by PSA.

Another notable 19th Century card is the 1887 Oshkosh baseball team cabinet, featuring Dummy Hoy and Hall of Famer Frank Selee.  “Selee is a quandary for Hall of Fame collectors,” explained Crisafulli. “There’s only one card of Frank Selee – literally.  The 1904 Allegheny Card Co. set is the only set in which Selee appears on a card by himself, and there’s only one known example of that card.  So if you want a card of Selee issued during his career, you have to widen your focus to multi-player, team cards – and there are very few of them.  This is the only example of this cabinet we have ever seen, and it pictures Selee by himself in a composite photo.  It’s about as close to an individual Selee card as you’re going to get.”

The auction also includes a 520-card T206 set, the third set the company has offered in the last year.  With many of the key Hall of Famers graded by PSA, it is an attractive example of a set that’s challenging enough to be nicknamed “The Monster.”

Collectors of Exhibit cards will find this auction fascinating, as the auction includes a host of rarities from 1921 right up through the Exhibit Supply Co’s 1960s issues.  The Exhibit offerings are highlighted by a newly-discovered 1921 Babe Ruth, one of the Babe’s tougher and more attractive cards.  The auction is loaded with Exhibits, however, including many tough examples, color tints, and variations.

On the heels of the company’s record-setting sale of his Roberto Clemente painting, Love of the Game is thrilled to offer another original work by noted sports artist Graig Kreindler.  “Hard Luck for Hardy” is one of Kreindler’s best-known works, and pictures Angels outfielder Mike Trout scaling the centerfield wall at Camden Yards on June 27, 2012 to rob Orioles shortstop J.J. Hardy of a sure home run.  The catch became a staple in highlight reels that has been written about for ten years.  The painting itself is not without controversy: social media posts have occasionally devolved into online arguments between Kreinder’s fans and antagonists who simply refuse to believe it is a painting and not a photograph.

The auction also features an original work by artist Tim Carroll.  Inspired by the hobby’s iconic cards, Carroll uses “junk era” baseball cards to recreate large-format mosaics in the designs of well-known (and far more valuable) baseball cards.  The auction features a beautiful recreation of the N162 Goodwin’s Champions Cap Anson, reconstructed out of what appears to be primarily 1980s Donruss commons.  The result is spectacular.

Love of the Game continues to live up to its reputation as a source for quality baseball memorabilia. This auction features a host of display items, highlighted by a number of 19th Century team photos, and a large run of World Series ticket stubs – one from each Series between 1920 and 2020, along with examples from 1908 and 1915.

The auction also features a wide assortment of vintage photography, highlighted by a beautiful Type 1 news service photo taken at the 1915 World Series, picturing a youthful Babe Ruth at the end of his rookie season.  The sale features more than 150 lots of memorabilia in total.

One of the company’s finest auctions yet, Love of the Game continues to build its reputation as an auction house for unusual items that you don’t see every day.

The final date to bid is Saturday, August 20.  To register for the auction and review the selection online, visit http://www.loveofthegameauctions.com.

Love of the Game is in the process of assembling its Fall, 2022 catalog auctions and “Great Cards” selections, which they hope will prove to be its biggest and most exciting sale yet.  For more information, or to consign your valuable material, contact Love of the Game at info@loveofthegameauctions.com or (845) 750-6366.

SALES TAX NOTE: Please note that we are required to collect sales tax in Arizona, Florida, Georgia, Illinois, Michigan, New Jersey, New York, Ohio and Pennsylvania. If you live in one of those states and have a valid resale certificate that we do not already have on file, please forward it to info@loveofthegameauctions.com before the auction ends. The auction opens this week and closes on August 20.

Also note: We’re already putting together our Fall 10th Anniversary auction, and looking for high-end material – if you’ve got anything you’re considering selling, it’s a perfect time to reach out! 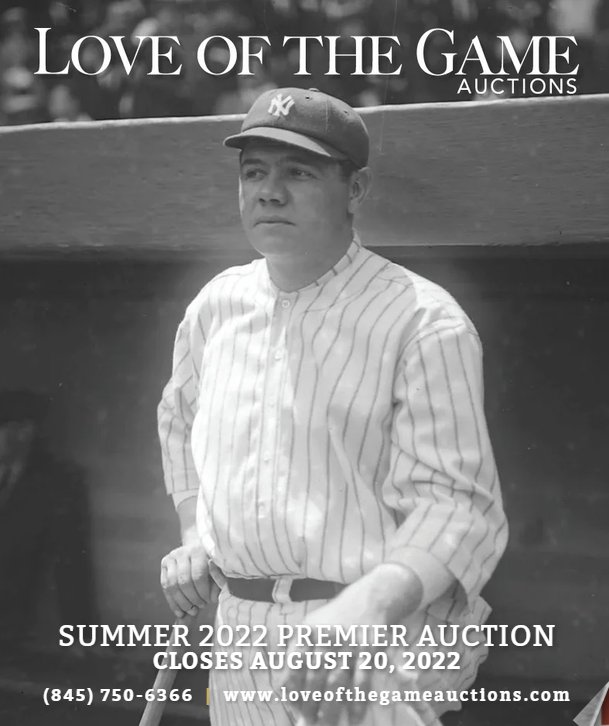