Love of the Game Auctions, an internet-based sports auction house catering to the passionate collector of cards and memorabilia, announced today that its Spring, 2016 auction is now open for bidding.  The auction closing date is Saturday, June 11.  The sale features sports and non-sports cards and memorabilia from the late 19th Century to the present, highlighted by the amazing Dennis Clotworthy Collection of Detroit Tigers memorabilia.  Clotworthy, a former Tigers batboy, has contributed more than 100 lots to this auction, highlighted by Al Kaline’s last bat.

Graded GU 10 by PSA/DNA, the bat was used by the Hall of Fame outfielder in his last at-bat on October 2, 1974, and given to the young batboy as a memento.  Clotworthy writes about the bat in his novel Al Kaline’s Last Batboy, a copy of which is included with the lot.

The collection also includes a host of unique memorabilia from Tigers Stadium, including a gorgeous 48” x 48” section of outfield wall padding with the commemorative 1912-1999 logo marking the Stadium’s final season.  Also featured is a fantastic section of outfield wall padding with the 415-foot marker from Tiger Stadium’s right centerfield, a gorgeous on-deck circle from Tiger Stadium circa 1994-96, and numerous signs, stadium seats, game-used bats, single-signed baseballs, and other assorted Tigers memorabilia.

The auction also features the first group of cards from the company’s noteworthy “Texas Find,” an original-owner collection of complete sets dating back to 1948.  The find, which included hundreds of sets, dozens of signed baseballs, and more than 600 signed 1952 Topps cards, has been the subject of news coverage around the world, including Forbes, FoxNews.com, and even The Daily Mail. 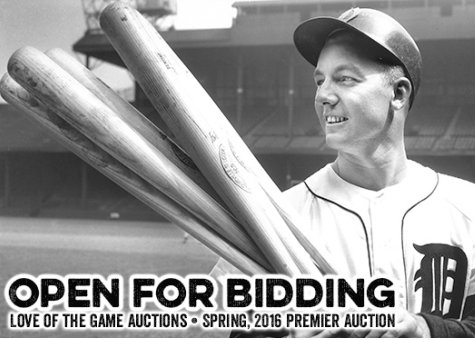 Also featured in the auction is a spectacular 1933 Goudey #106 Nap Lajoie.  One of the hobby’s greatest rarities, the clean, sharp card has been graded EX-MT 6 by PSA.  A spectacular example of what is often considered one of the three or four most significant cards in collecting, this is one of the finest examples of one of the hobby’s most desirable cards.

The auction also includes one of the rarest and most coveted prewar Hall of Fame tobacco cards – the 1910 T210 Old Mill Tobacco card of Casey Stengel.  Graded GOOD, the card presents far better than many other examples from the issue, and serves as Stengel’s “rookie” card.

Rounding out the auction’s featured items is a tremendous 1934 Goudey baseball set, entirely graded by PSA, ranking #8 on the PSA Set Registry.  With just ten cards graded below EX-MT, the set has an outstanding rating of 6.69.

One of the auction’s key highlights is a 1920 Tris Speaker Game-Used bat, attributed to Game 7 of the 1920 World Series.  The bat, which was purported to have been given by Speaker to a young boy at the conclusion of the Indians’ first championship victory, remained with that same fan until it was given to the bat’s consignor in the mid 1990s.  Graded GU 8 by PSA/DNA, the Louisville Slugger 250 model is simply gorgeous, a rare bat from one of the game’s greatest hitters.

Another memorabilia highlight is a 1956-57 Marshall College basketball MVP award given to Hall of Famer Hal Greer by a local fraternal organization.  Greer was the first African-American to play major college basketball in West Virginia, and with more than 20,000 points scored in his career, remains the only African-American athlete from West Virginia to be enshrined in a major sports Hall of Fame.

Rare baseball postcards are also heavily represented, highlighted by a stunning 1914 E&S Postcard of Joe Jackson.  Also featured is a 1910s real photo postcard of Walter Johnson and Ad Brennan, originating from Walter Johnson’s personal collection.  The photo, taken in November of 1912 in Humbolt, Kansas before a game between two semipro teams featuring Johnson and Brennan, was originally featured in a 1912 issue of the Humboldt Union newspaper.

The company’s ever-expanding selection of 19th Century cards is highlighted by a scarce 1887 Tomlinson Studios cabinet photograph of the 1887 Detroit Wolverines, featuring Hall of Famers Dan Brouthers, Sam Thompson, Ned Hanlon and Deacon White.  The cabinet originates from the family of Wolverines pitcher Charles Getzein, and was featured in Forbes recently, yet another wonderful prewar find consigned to Love of the Game.

Other key 19th Century items include a stunning 1888 Fearnaught Studios cabinet photo of Hall of Famer Deacon White that was ultimately used for his N172 Old Judge card, a spectacular 1888 A.E. Woolen cabinet photo of the Minneapolis Millers’ Fred Rehse, and a beautiful group of 1895 N300 Mayo’s Cut Plug cards including those of Hall of Famers Dan Brouthers, John Clarkson, and Hugh Duffy, along with the very scarce Jack Glasscock (Pittsburgh) and Tom Kinslow (No Team) variations.

The auction also includes a large assortment of rare baseball card types and variations, including 1909 Croft’s Candy cards of Dots Miller with the rare Red back, and blue-backed cards of Honus Wagner, both batting and throwing.

The auction also features two extremely rare cards from the 1910 E105 Mello-Mint set: those of Hall of Famers Christy Mathewson and Joe Tinker.  Both graded FR 1.5 by PSA, the cards are exceedingly rare, the Tinker one of just three graded examples known.

In fact, the auction includes what may be the largest group of 1924 Diaz Cigarettes cards ever assembled, in a group of 19 graded examples offered in a single lot.

The auction also features a large number of Zeenut PCL cards with coupons from a variety of years, a large number of 1920s Exhibit cards, and four different cards from the rare 1917-20 M101-6 Felix Mendelsohn issue, including Hall of Famers Max Carey, John McGraw, Sam Rice and Ed Roush.

The auction features a large number of high-end autographs, including a pair of baseballs obtained at Miller Huggins Park in St. Petersburg, Florida during spring training of 1934 signed by Babe Ruth, Grover Cleveland Alexander, Joe Tinker, Johnny Evers, and others.  The balls are accompanied by a snapshot album featuring photos from the Spring Training games, and were consigned from the estate of their original owner.

The auction features a number of signed legal release forms that were sent by various players to player agent Christy Walsh in the early 1950s, giving permission to Walsh to use the players’ likenesses for various promotional initiatives.  Signed forms include Ty Cobb, Eddie Collins, Cy Young, Al Simmons, and more.

Other unique autographs include a rare typed and signed letter from Hall of Famer Hughie Jennings to Hall of Famer Hugh Duffy, a Christmas card from Ty Cobb, a newspaper photo signed by Honus Wagner with the autograph graded GEM MINT 10 by PSA/DNA, several Burke photos featuring high-grade signatures from the likes of Luke Appling (PSA/DNA 10), Ted Lyons (PSA/DNA 9) and Joe McCarthy (PSA/DNA 8) and a beautiful wooden seat from Briggs Stadium in Detroit signed by more than 40 former members of the Tigers.

The final date to bid in this auction is Saturday, June 11.  To register for the auction and review the selection online, visit http://www.loveofthegameauctions.com.

Love of the Game is in the process of assembling its Fall, 2016 catalog auction, which they hope will prove to be its biggest and most exciting auction yet.  For more information, or to consign your valuable material, contact Love of the Game at info@loveofthegameauctions.com or (973) 452-9147.