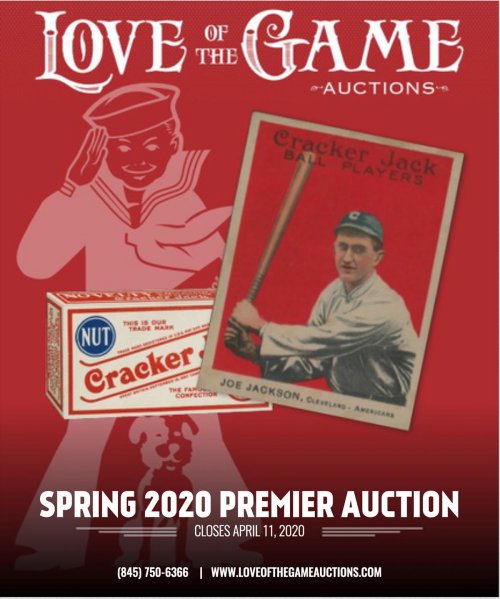 Bidding continues at Love of the Game Auctions, an internet-based sports auction house catering to the passionate collector of cards and memorabilia.

The auction closing date is Saturday, April 11.  The sale features one of the strongest selections of sports cards and memorabilia in its history, and is highlighted by one of the most valuable baseball cards it has ever handled: an impossibly rare 1909-11 T206 Ty Cobb with Ty Cobb Back.  A recent discovery, the card has been graded by PSA, and is one of just two dozen known examples.

“Over the years, we have been fortunate to have handled quite a few Cracker Jack collections,” said Auction Director Al Crisafulli.  “This is, by far, the finest, and the most complete.  It was assembled by a dedicated collector who built the set card-by-card, looking for the finest examples he could find.  And this set is extra special – not only does it include the complete, 144-card 1914 set, but it also includes the 32 ‘new’ cards that were issued in 1915, plus the seven pose and player variations that were changed from 1914 to 1915.  It is truly an incredible set, and will give every Cracker Jack collector the opportunity to chase after those hard-to-find cards they’ve been chasing for years.”

The auction also features a large selection of game-used memorabilia from the Ted Patterrson collection, highlighted by a beautiful 1957-67 Raymond Berry Baltimore Colts jersey, graded A10 by MEARS.

“Ted’s game-used collection is spectacular,” explained Crisafulli.  He worked as a sportscaster for decades, and was an avid collector the entire time.  Most of the jerseys, bats and caps in his collection were obtained directly from the players, or from the equipment managers of various ballclubs.”

Crisafulli explained that his favorite jersey in this auction was a beautiful 1964 Robin Roberts Baltimore Orioles flannel road jersey.  “It’s in great shape, and was worn toward the end of Roberts’ career.  I think today, Roberts’ career is overshadowed by a lot of the bigger-name pitchers of his era, but many people don’t realize he won 20 games six years in a row. He was a heck of a pitcher.”

Over the years, Love of the Game has built a reputation for being an outstanding source for rare tickets, passes and game programs.  In addition to the outstanding grouping of 1919 World Series tickets, this auction includes a complete PSA-graded collection of tickets, stubs and passes to the 1956 World Series, a host of early World Series ticket stubs (including a run of five stubs to the Yankees’ first World Championship in 1923), stubs from Roger Maris’ record-tying and record-breaking home run, and an amazing lifetime Major League pass owned by Yankees’ catcher and team captain, Thurman Munson.

The “rookie card craze” has extended from baseball into other sports, but the Spring LOTG auction also includes one of the most interesting “rookie card” collections the company has ever seen – including less-popular sports like chess, horse racing, track and field, soccer, and auto racing, as well as politics, literature, and other facets of history.  Interested in the rookie card of Geronimo?  Marie Curie?  William Shakespeare?  Mark Twain?  Winston Churchill?  Charles Lindbergh?  Love of the Game offers those and many, many more.

Keeping in line with Love of the Game auctions’ specialties, the sale features a large selection of 19th and early 20th Century cards and memorabilia, a host of seldom-seen or unique items, an exceptional grouping of tough prewar type cards, and a number of seldom-seen vintage baseball photos.  One of the company’s finest auctions yet, Love of the Game continues to build its reputation as an auction house for unusual items that you don’t see every day.

The final date to bid is Saturday, April 11.  To register for the auction and review the selection online, visit http://www.loveofthegameauctions.com.

Love of the Game is in the process of assembling its Summer, 2020 catalog auction, which they hope will prove to be its biggest and most exciting auction yet.  For more information, or to consign your valuable material, contact Love of the Game at info@loveofthegameauctions.com or (845) 750-6366..

The Spring, 2020 Love of the Game Auction includes more than 80 lots related to the 1919 White Sox and Reds, including rare ticket stubs, game programs, autographs, and more!

Love of the Game’s fall sale features a host of game-worn items, from the 1950s to the 2000s, with impeccable provenance, including:

Game-used bats at Love of the Game:

Autographed Cards at Love of the Game!

Cracker Jack Baseball at Love of the Game – We’re thrilled to offer the most complete collection of 1914 and 1915 Cracker Jack baseball cards we’ve ever seen in one place: a full 1914 set, plus the 32 additional cards issued in 1915, PLUS all 7 pose and player variations! The 1914 set ranks #5 on the PSA Set Registry! Auction closes April 11 – there’s still plenty of time to bid!

Rookie Cards at Love of the Game: