Expected to sell for a six-figure price, the PSA 2.5 example was one of seven ultra-rare “Cobb with Cobb back” tobacco cards found by a family cleaning up a deceased relative’s home last winter. Despite the jaw-dropping find, the population of T206 Cobb backs is less than two dozen. 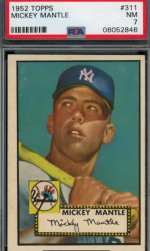 Memory Lane will also be breaking up two high-grade sets: a 1933 Sport Kings and a 1954 Topps hockey, with all cards in each set rated PSA 8 or better.
Intrigue comes in the form of a 1952 Topps unopened wax pack, which carries a high grade ($5,000 minimum bid) and a 1960 Topps 4th series cello pack with Mickey Mantle showing on top. 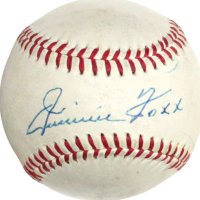 The memorabilia section is headlined by several rare autographed baseballs including a fresh- to-the-hobby Christy Mathewson single-signed Spalding National League ball with family provenance, a single-signed Jimmie Foxx ball with a PSA LOA and a rare signed ball from Grover Cleveland Alexander, penned in 1928 and carrying a full PSA letter. The auction will also feature the only signed 1938 Goudey “Heads Up” Joe Di Maggio card on PSA’s population report and an autograph grade of 9.

Collectors of original photos will have several items to consider including a Type 1 1930s George Burke image of Lou Gehrig.

The auction will continue through Saturday, August 12 with registration open on Memory Lane’s website or by calling them at 877-606-LANE (5263).  As usual, Memory Lane will be just inside the front door of the National Convention, at booth #1104.