Goldin Auctions has just added memorabilia from former boxing champion Hector “Macho” Camacho to its June 26-27, 2021 auction. Consigned by his former manager, the items include incredible pieces of boxing history, including fight-worn gear and much more. 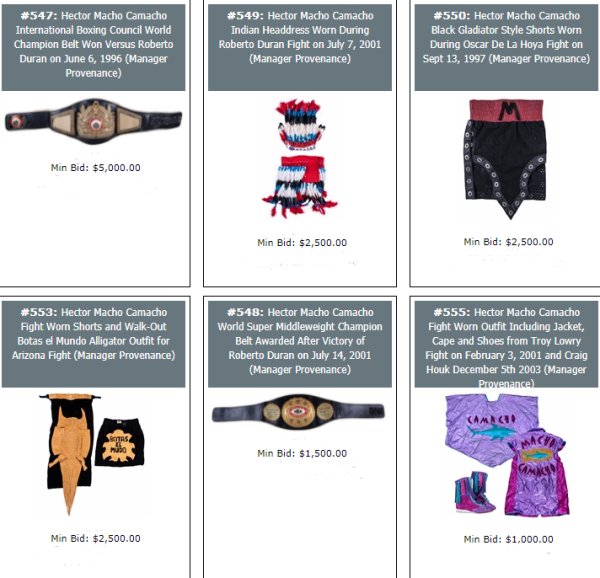 Some of the most notable items available for bidding include:

Camacho was a world champion in three weight classes and one of the most notable boxers ever. He was known for his quickness in the ring and his flamboyant style of ringside dress. Now, boxing fans have the opportunity to own pieces of those legendary outfits. Camacho’s story was also recently immortalized in the Showtime documentary ‘Macho: The Hector Camacho Story’, which detailed his inspiring rise to fame until his tragic murder in 2012.

A link to the full Camacho collection can be found here and high-res images of notable lots can be found in this Dropbox link. In addition to the Camacho items, the June auction, which is currently open, features other memorable boxing items including a Muhammad Ali trading card, which may fetch $50,000 or more.

Over the years, Goldin Auctions has handle the sale of boxing memorabilia from some of the greatest champions of all time, including Muhammad Ali, Joe Louis, Rocky Marciano, Mike Tyson, Floyd Mayweather and many others.

Goldin Auctions is the leading marketplace for trading cards, sports memorabilia and other collectibles. Founder Ken Goldin has sold more than $1 billion in memorabilia from many of the biggest names in sports, history, and pop culture. The company routinely sets records for the most expensive trading cards and other memorabilia ever sold. Lifelong collectors and new hobbyists alike trust Goldin Auctions because the company professionally authenticates everything it sells. Goldin Auctions is the official auction partner of the Naismith Memorial Basketball Hall of Fame, The Major League Baseball Players Alumni Association, The Jackie Robinson Foundation and the Babe Ruth Birthplace and Museum. For more information, visit GoldinAuctions.com. Learn more at www.goldinauctions.com, on Twitter and Instagram.