A signed jersey worn by Earvin “Magic” Johnson during one of the greatest games in his storied career as a Los Angeles Laker sold early Sunday morning for $1.5 million at Heritage Auctions. The jersey was worn that magical May 1980 night in Philadelphia, when the rookie racked up 42 points, 15 rebounds and seven assists to lead the Lakers to the team’s first title since 1972. Fittingly it’s now one of most valuable NBA jerseys of all time.

In fact, a pair of iconic Nikes signed by Michael Jordan tied the record for the highest price ever paid for his game-worn sneakers set only last year.

“The auction was a success across the board, with incredibly strong results for our consignors as many new records were being set well into Monday morning,” says Chris Ivy, founder and president of Heritage Sports. “One of the most exciting things about this event was the significant number of new bidders, who helped prove that the sports collectibles market remains extraordinarily healthy.” 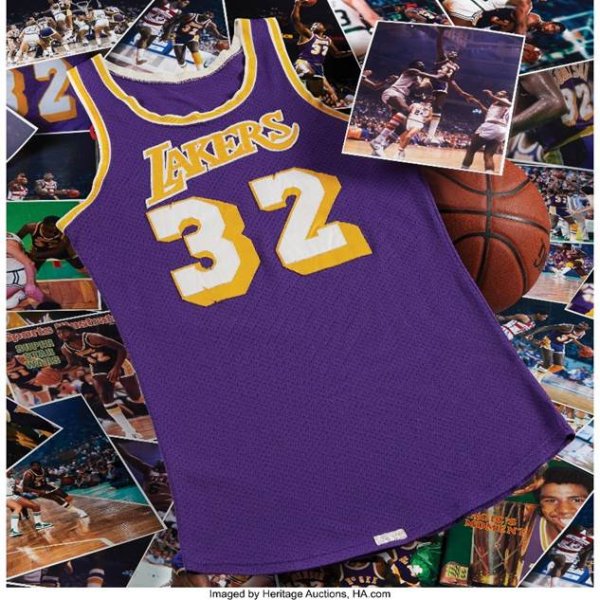 Johnson’s inscribed jersey was photo-matched to that title game, during which he played every position – including center in the absence of an injured Kareem Abdul-Jabbar. But its history extends far beyond that one magical moment: MeiGray and Resolution Photomatching also found Johnson wore the jersey again during the 1984 NBA Finals loss to the Boston Celtics.

Joining the man called Magic at the top of the two-day event’s results was the ballplayer named Babe.

A 1920 Babe Ruth game-used and signed bat sold this weekend for $870,000, its price tag befitting its place in baseball history. This Hillerich & Bradsby Ruth model is the earliest known signed Ruth gamer to ever appear at auction; that it dates to his then-record-shattering 54-home-run season only cements its legend.

But the bat, too, is signed “To My Friend Eddie Maier From ‘Babe’ Ruth, 1920,” linking this lumber to one of the first collectors of game-used bats: Eddie Maier, at the time president of the Vernon Tigers of the Pacific Coast League. This was a prized piece among Maier’s vaunted collection that included autographed bats used by the likes of Joe Jackson, Tris Speaker and Napoleon Lajoie. A century later, another collector swung for the fences to collect this Ruth trophy.

Another historic bat sold this weekend for $855,000: the Mizuno that Pete Rose used in 1985 to collect his 4,191st hit, tying him (at the time) with Ty Cobb. The signed bat is more than a game-used piece of lumber: Accompanying it is a letter from PSA/DNA noting that “during our examination of this Pete Rose professional model bat we noticed an irregularity on the top of the barrel causing us to opine the bat has been corked. This irregularity has been seen on a few of the bats of Pete Rose in our PSA database.” Its six-figure price tag was a sure bet.

Michael Jordan, too, wouldn’t be denied his place in the auction’s top five, as a pair of Air Jordan 1s worn in 1985 and signed six years later sold for $615,000, trying a record for Jordan gamers set exactly one year ago. What made these sneakers so special was the fact Jordan signed both shoes on network television just hours before the Bulls claimed their first NBA title.

The Atlanta Braves jersey Hank Aaron wore when he collected his 3,000th hit on May 17, 1970 – against the Cincinnati Reds in front of a record crowd – sold this weekend for $540,000. Bidding for that significant autographed and photo-matched jersey extended into the wee small hours of Sunday morning, helping it to shatter the record of $138,000 paid for an Aaron jersey in 2019.

Another record set this weekend was the $348,000 paid for a 1998 Peyton Manning game-worn Indianapolis Colts jersey, which was photo-matched to his very first NFL game, when Manning squared off against Dan Marino at the RCA Dome. This was, by far, the most ever paid for Manning memorabilia, and a Nov. 17, 1998, letter from the quarterback further confirms its place in history. Manning wore this top while going 21-for-37 for 302 yards in the first of the 293 games played during his Hall of Fame career.

Cards, too, continued to soar in this auction, as bidders vied for some of the best-known examples of some of the most iconic cardboard in history.

Dozens of cards sold in this auction for six figures, many far surpassing their estimates.

But it was memorabilia that hit it out of the park over the two-day event. That includes the finest-known baseball to bear the signatures of both Joe DiMaggio and his then-wife Marilyn Monroe, which was acquired by a New York-area news photographer in the early 1960s as the couple were vacationing in Florida during spring training. So extraordinary is this keepsake that in 1989, there was a two-page story in Newsday about its provenance.