The previous record price for a 1952 Topps Mickey Mantle in near mint condition wasn’t just surpassed early Sunday morning. It was destroyed. Memory Lane sold the PSA 7 graded example of the most popular post-War baseball card ever made in its Summer Break Auction and when the dust settled, the final tally was $99,185, including the 19.5% buyer’s premium.

Several hundred lots were offered in the auction and the ’52 Mantle wasn’t the only card to generate an eye-popping number. 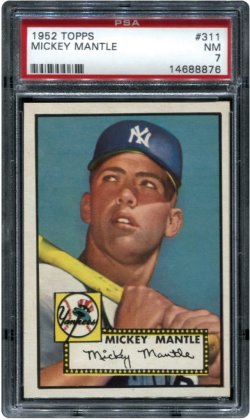 Those in the market for a high-grade Hank Aaron rookie card congregated around a PSA 8 example offered by Memory Lane.  Bidding ended with the card reaching $24,478.

Collectors of the 1962 Topps set know how difficult it can be to find high-grade examples and prices reflected that sentiment.  A mint card of Roger Maris, #1 in the set, sold for $18,457 while a PSA 9 Manager’s Dream card featuring Mantle and Mays rocketed to $13,080.

High-grade, iconic football cards also got plenty of respect from bidders.  One of the most sought after vintage cards of all, the 1935 National Chicle Bronko Nagurski graded PSA 6, set a new industry plateau when it realized $23,880.

In all, over $2.1 million worth of sports cards and memorabilia were sold in the auction, which began July 25, just prior to the National Sports Collectors Convention in Chicago.

“This auction was really a blockbuster with the ongoing strong demand for high-grade, Hall of Fame star and rookie cards,” said Memory Lane’s J.P. Cohen.  “We were really pleased to see the momentum we saw at the National continuing to carry over.  It’s a good sign for the strength of the hobby.”

In addition to cards, Memory Lane also specializes in high quality, vintage photographs and two historic Charles Conlon images of Babe Ruth were among those sold in the auction.  One had crossover appeal to card collectors.  A 1927 Type 1 8×10 shot of Ruth used to create one of his 1933 Goudey cards soared to $25,228.  A second Conlon photo of Ruth in the early 1920s brought $6,820.

Fans of vintage unopened material weren’t disappointed.  Several wax, vending, rack and cello boxes and packs were available including a 1961 Nu-Card Scoops Baseball box of 24 wax packs which sold for $12,206.

Memory Lane is still consignments for its next catalog auction, set for late this fall. For information on consigning or to register for future events, visit the company’s website or call 877.606.LANE (5263).