Mickey Mantle’s first Hillerich & Bradsby professional model bat from an order placed in September 1950, possibly his first bat ever used as a Yankee, sold for $242,209 to top the bidding in SCP Auctions’ 2015 Spring Premier which concluded early Sunday. A game-worn and autographed Mantle 1952 New York Yankees home jersey was next in line, selling for $227,856. In total, the auction of more than 1,300 sports memorabilia items brought in $4.1 million.

Part 3 of The Delbert Mickel Estate Collection of Important Baseball Jerseys brought in $363,977, led by the sale of a game-worn Stan Musial 1963 St. Louis Cardinals complete uniform for $73,408 from his last season in the majors. The Tony Gwynn Estate Collection fetched $214,090, a portion of which will go toward the Tony and Alicia Gwynn Foundation (www.tag2.org), while the personal collection of NFL Hall of Famer Rod Woodson took in a total of $163,570, led by the sale of his 2009 NFL Hall of Fame ring which went for $25,076. 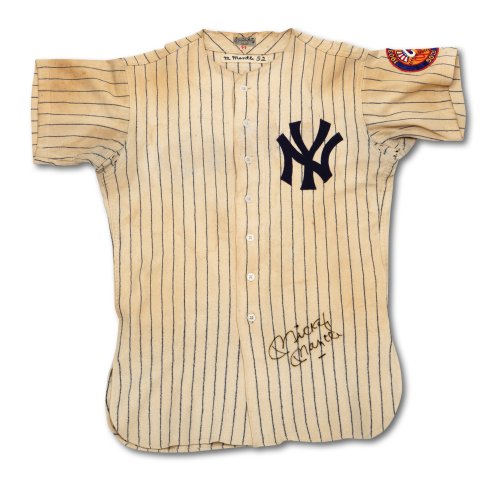 About SCP Auctions
SCP Auctions, Inc. has been a leader in brokering and auctions of important sports memorabilia and cards since 1979. The Southern California based firm conducts three online auctions every year, highlighted by their Premier Auctions in the spring and fall. SCP Auctions has handled some of the most significant individual items and prominent collections in their field, such as the record-setting sale of the earliest known jersey worn by New York Yankees legend Babe Ruth ($4.4 million), the famed T206 Honus Wagner baseball card ($2.8 million) and Babe Ruth’s bat used to hit the first home run in Yankee Stadium in 1923 ($1.3 million). Interested bidders can call (949) 831-3700 or visit SCP Auctions online at www.SCPAuctions.com for more information on how to participate.