Three battle maps owned and used by Gen. Omar Bradley from the June 6, 1944 Allied invasion of occupied France at Normandy are expected to be among the most coveted lots at Heritage Auctions’ Arms & Armor Auction June 11 in Dallas.

The largest seaborne invasion in history, the assault included 156,000 American, British and Canadian forces landing on five beaches along 50 heavily fortified miles of French coastline. The day known as “D-Day” is recognized as the start of the Allies’ liberation of Western Europe from Nazi Germany’s control.

Omar Bradley’s D-Day Map for Operations Overlord and Neptune (est. $70,000 and up) was used by Bradley during the invasion at Normandy. Titled “Situation – 2400 Hrs 6 June 1944 Hq. Fusag [First United States Army Group] Secret,” the map measures 20 inches high by 22-1/2 inches wide, and is printed with blue and black ink. Presumably prepared as the invasion was about to get underway, or perhaps when it was in progress, some enemy positions are marked “Not Confirmed” or “Unconfirmed” or simply marked with a question mark. Maps like this one were Gen. Bradley’s guide for formulating a daily plan of action; each morning, Gen. Bradley would review these maps with his staff to assess the battlefront, assets, risks and enemy strength. This is among several maps that were on board the U.S.S. Augusta (his makeshift headquarters) on the English Channel during the D-Day landings. This map is in pristine condition, having been cleaned recently by a conservator formerly affiliated with the Smithsonian Institution.

Another of Gen. Bradley’s D-Day maps (est. $40,000 and up) is similar in many ways, although the “Secret” designation was downgraded to “Confidential.” This map shows the position of American, British and German forces on the first full day of the Allied invasion that led to the defeat of Adolph Hitler and the subsequent liberation of Europe.

A third Gen. Bradley D-Day map (est. $40,000 and up) has the same measurements and also carries the “Secret” designation. Like the first two, this map was produced by the 12th Army Group Engineering Department. It notes the location of German tanks, both inland and along the lines of defense, and shows higher troop concentration than that shown on the previous day’s map, as both sides dedicated extensive resources to the struggle that altered the course of the war. The three maps included in the Arms & Armor Auction were part of a set Gen. Bradley used in his capacity as commander of all U.S. ground forces in the invasion. 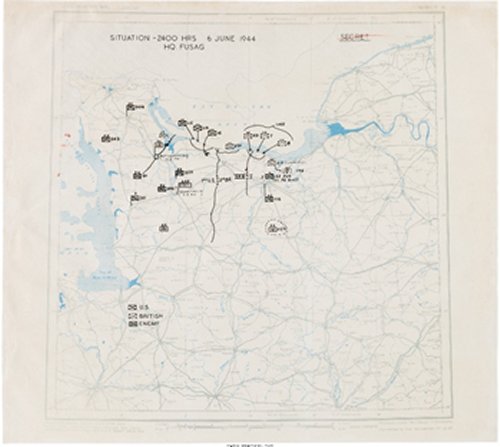 After examining these maps, Luther D. Hansen, curator of the U.S. Army Quartermaster Museum in Fort Lee, Va., vouched for their authenticity and rarity. “From my examination of these Omar Bradley WWII Headquarters FUSAG/12th AG battle maps, I conclude that they are original to WWII and one of only four original sets ever produced … I believe that this Omar Bradley map set is the only set in private hands. To view Bradley’s maps 70 years later, with the benefit of historical reassessment, we can see the omissions and intelligence failures that impacted his decisions and battle outcomes. Especially interesting is the map heading ‘HQ FUSAG’ on D-Day which represents the fictitious ‘First U. S. Army Group’ decoy Army Group from Operation Quicksilver. Omar Bradley’s map headings changed to ‘HQ Twelfth Army Group’ after the enemy figured out the deception. In terms of rarity and historical significance, these maps are a perfect 10.”

A Battle-Scarred Flag that flew from the LCT 540 (est. $40,000 and up) was consigned by Ensign (later Lieutenant) William L. Wilhoit. The professionally framed flag measures 36 inches long and is folded and mounted to a red velvet background with a metal plaque with an inscription that reads: “Flag of the US LCT 540/Normandy Invasion/June 6, 1944.” The flag is accompanied by a letter of authenticity signed by Wilhoit dated June 16, 2016 and copies of the Presidential Unit Citation to United States LCT (landing craft, tank) 540 signed by Secretary of the Navy James Forrestal and a Navy Cross Citation to “Ensign William L. Wilhoit United States Naval Reserve” that also was signed by Forrestal.

A Blood-Stained Flag from the Battle of Antietam (est. $30,000 and up) measures 77 inches wide by 46 inches high and features a canton (blue rectangle at the top hoist corner) with 34 stars – six in each of the two bottom rows, and five and six more alternating in the top four rows, and is housed in a frame that measures 85 inches wide by 53 inches high. According to family lore, after the Battle of Antietam (Maryland), Gen. George B. McClellan and his troops were riding down a street in Sharpsburg when he directed that the flag be given to a local resident with the message that “here is something to remember us by.” The flag remained in the recipient’s family for more than 90 years before being given to the consignor’s father, and was loaned to the Sharpsburg Museum in 1962 for the 100th anniversary of the Battle of Antietam. The flag, which is sewn on to a burlap backing and sealed against moisture, has 17 bullet holes and significant blood staining, mostly near the canvas hoist.

A set of Confederate Artillery Implements and Augusta Fuse Box (est. $24,000 and up) is marked “J. Darrow Augusta, GA” in an oval stamp on the flap. The group includes a finely crafted lanyard that was used to set off the cannon blast; a Confederate-manufactured friction primer that was used to spark the cannon’s ignition; a vent pouch that would have cleaned out the fuse hole of the cannon; three shell fuses, two of which are wrapped; and a long steel cylinder with brass ends that was used to hold the bursting charge for an Armstrong cannon. Also included is a copy of the 2005 No. 2 edition of North South Trader magazine, which featured the implements and Augusta box on the front cover of that issue and an article detailing the pieces and showing images of the factory that manufactured the box.

A Confederate First National Flag – Reportedly Captured from the Biloxi Courthouse in 1861 (est. $20,000 and up) measures 75-3/4 inches wide and 37 inches high; its frame increases the dimensions to 82-by-44. A 13-star variant of the First National Flag of the Confederate States of America, it reportedly was accompanied at one time by a now-lost label that said the flag was found in an old coffee can inside the vault of the Hancock County Courthouse that was being demolished to make way for construction of a new facility. The label said the flag flew on the Biloxi, Mississippi Courthouse and that was “captured by vile, Yankee, invading forces during the capture of Biloxi. The flag eventually was returned to the Biloxi-based Mississippi Division of the Sons of Confederate Veterans, and its size and use of the 13-star design is consistent with a dating of 1861, when neighboring states Missouri and Kentucky were on the verge of secession. Included are a letter of provenance written in 2005 by then-owner Michael Adamson, a 2005 letter from noted Civil War expert Les Jensen and a list of extant Mississippi Confederate flags.

One of the unique lots in the auction is an Original WWII German Navy (Kriegsmarine) Four-Rotor M4 Enigma Enciphering Machine Recovered from the Wreck of the German Submarine Tender Ammerland (est. $20,000 and up). One of what might be as few as 120 surviving examples, this Enigma machine was used in Germany during World War II to transmit coded information after the realization that Western Allies were intercepting German Navy signals, and is credited with playing a significant role in the development of modern computing. Because of the rarity of remaining machines, examples in any condition rarely find their way to the collector market; some that have gone to auction recently have realized sale prices between $150,000 and $300,000. Early Enigmas had three interchangeable rotors, which scrambled plain-text messages to produce a cipher text message, which then was sent via Morse Code to a receiver machine with the same settings, sparking efforts by opposing forces to crack the code that shielded the messages. The M4 model Enigma was ordered by German Admiral Karl Doenitz in 1941 after he feared the security of the M3 (three-rotor) machine had been compromised with the capture of the German submarine U-570 in August 1941. This M4 example was recovered by Swedish divers from the wreck of the German submarine tender Ammerland, circa 1990. The Ammerland was attached to Sicherungsflottille 9 in the Baltic Sea when it was sunk Feb. 10, 1945, southwest of Liep?ja, Latvia. After being submerged for about 45 years, it is preserved in distilled water until it can be properly restored.