One of the most comprehensive collections of Robert E. Lee photographs – many of which are signed by Lee – will be offered in Heritage Auctions’ Americana & Political Auction May 4-5 in Dallas, Texas.

“Dr. Hopkins’ collection of Robert E. Lee photographs is extremely impressive and thorough,” Heritage Auctions Americana Director Tom Slater said. “With more than 100 lots, some of which contain multiple images, there are opportunities in this sale to own images that range from the most well-known and popular to some exceedingly rare images, as well.” 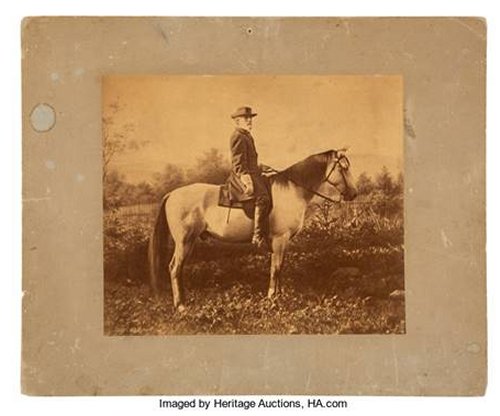 Among the top lots in Dr. Hopkins’ collection:

Robert E. Lee: Mammoth Mathew Brady Photograph is a double-matted and framed photo showing a full view of Lee seated next to a table topped with an elaborate clock. This is not the same pose as the commonly seen “clock portrait” because of the position of Lee’s elbow in relation to the clock on the table, and other details.

Robert E. Lee: Full Standing “Blockade Portrait” Carte-de-Visite [CDV] by Vannerson & Jones is a post-war printing of the 1864 studio portrait by Vannerson, one of two taken for use by 19th-century artist E.V. Valentine as models for his sculpture. The offered image was printed from Vannerson’s original negative after he entered into a partnership with Jones.

Robert E. Lee: Unpublished, Boldly Signed Carte-de-Visite [CDV] is a vignette bust of Lee, taken during fall and/or winter of 1865-66 by Isaac N. White and Joseph Kelley, who took one outdoor view of Lee atop Traveller, Lee’s most famous horse during the American Civil War, and two indoor shots. It has a cancelled two-cent stamp on verso, and is inscribed “White & Kelley.” The Alexander family in Stuart’s Draft, Augusta County, and Virginia from kept the offered CDV 1866-2013. It descended through the family and was found secured in the Alexander library inside a copy of General Lee: Great Commander Series by Fitzhugh Lee.

Robert E. Lee: Large Mounted Albumen of Lee on “Traveller” was taken during the summer of 1866 by A.H. Plecker, assisted by Michael Miley, at Rockbridge Baths near Lexington, Virginia. The image includes a blind stamp of M. Miley in the lower left corner. Also visible are two presentation inscriptions on verso, dated 1890 and 1959. The first, inscribed to Mrs. George Hearst, clarifies that the image was made from the original negative, which remained in the possession “of the photographer at Lexington.”

Robert E. Lee: Boldly Signed Brady Carte-de-Visite was taken in Washington, D.C. in 1866 by Mathew Brady when Lee was attending a Senate hearing. The offered image is one of at least nine known variant views taken during the sitting in Brady’s studio. The image is signed “R E Lee” at the bottom.

Hopkins is a surgeon from Mississippi who has been a lifelong student of the Civil War and Southern History. During his research while preparing to write Robert E. Lee in War and Peace: The Photographic History of a Confederate and American Icon, Hopkins acquired a copy of every photo of Lee (61 at the time) known to exist. In the book, he paired those with a detailed recounting of Lee’s life and an in-depth discussion of antique photography and a meticulous account of how many of the images were made. His book marked the first time many of the photos were published anywhere.