MEARS Auctions has launched there November 2, 2019 auction. As tradition dictates, we are offering a large selection of items than span all collectors’ budgets and tastes. 450+ lots of items from football, basketball, baseball, and non sports available for all collectors. Lots may be viewed and or to register go to www.mearsonlineauctions.com. Hundreds of items including autographs, memorabilia and game used items! 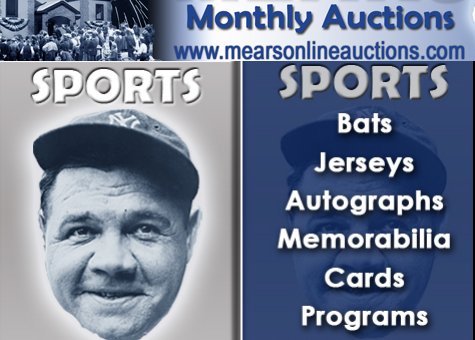 MEARS Auctions: ” Story about a man, a woman, a sewing machine and how darned lucky they were”

MEARS Online Auctions October World Series tribute auction is now live. For this month’s sale, we have a very unique piece with a very special story. Lot 68 contains quite probably the last pair of Wrigley Field home pants worn by Ernie Banks as a player during his swan song 1971 season.

The story of the pants are: Ernie Banks Pants
“Neighbors of our consignor, Bryan Loomans, were riding their tractors while working the fields, listening to WGN on their AM radio when the Cubs announced the players selected in the 1973 draft. “Bryan Loomans” was broadcast as one of the names. Immediately the townsfolk began to congratulate the aspiring ball player. Barely married for two weeks, Bryan and his newly wed wife Cindy packed up their belongs in the new car that was purchased with his signing bonus and the couple drove to Florida to report to the Key West Cubs. All of their worldly possessions were packed in the car, including Cindy’s sewing machine, and the pair began the adventure of their young lifetimes. 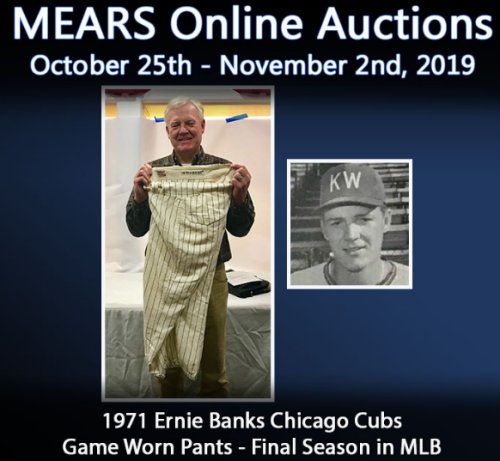 Bryan would be busy playing ball, and Cindy looked for part time work. Posted at the ball park was a notice “Seamstress Wanted”. Having brought the sewing machine and having a couple years of home economics under her belt, Cindy applied for the job and was hired.

Her employer was the Key West Cubs, and her job was do mend the uniforms, which were hand me downs from the 1971 Chicago Cubs parent team. Since it was 1973, the uniforms had a full season of additional wear, and many were in need of darning. Rips and holes were to be patched with a donor. A donor was one that was to be cut in pieces, thus sacrificing itself for the betterment of the surviving group. With a scissor in hand, Cindy was inches away from making her first cut into the donor pants.

As a fan of the game, Bryan noticed something in the waistband of the pants that caught his attention. A quick inspection verified the number 14, which Loomans immediately recognized as the key identifier of Mr. Cub, Ernie Banks. Originally sewn into the waistbands of these flannel gems was “14 (uniform number), 71 (1971), 34 (inseam), 25 (length). Saved from the knife were Ernie Banks’s game worn Chicago Cubs home pants from 1971, his final season in the major leagues. The Cubs finished their season on the road, but on September 26th, 1971, Banks played his final home game at Wrigley Field, going 1-3. It is quite likely he wore these pants during that game, although we could find no photos to support that theory.

Pants remain in excellent plus condition. Ernie Banks kept in touch with Bryan and send annual Christmas cards. One is included with this lot. Copies of Bryan Looman’s introduction letter to the Cubs, picture of Loomans wearing his Key West Cubs cap, and yearbook photo are posted in this lot description. Signed LOA from Bryan & Cindy Loomans included with the lot. MEARS LOA, Troy R. Kinunen. (31G0246).

For fans of the Chicago White Sox, we have a 50 year collection which is fresh to the hobby:

About MEARS Auctions
MEARS Auctions is an internet based sales venue that operates out the 15,000 square foot MEARS Corporate Research and Conference Center located in South Milwaukee, Wisconsin. As a separate division within the MEARS structure, we can focus almost exclusively on obtaining and offering unique and quality sports, pop culture, and Americana memorabilia for your consideration.

Our auction cycle, combining both large and small events, allows us to ensure that we can offer something to all collectors, no matter their personal interests or budget. We do all this with the same level of commitment and integrity that collectors have become accustomed to associating with the MEARS name.

Bid, view items, register and consign to MEARS Auctions by visiting our web site at www.mearsonlineauctions.com.