Although the collecting public is very aware of the rarity, scarcity, and desirability of the 1960-1961 14” promotional nodders, at the time of this writing, nobody had ever found a boxed example from either the baseball or football line. As collectors of rare toys know, the box is what separates the record setters from the dust collectors. To describe the lot, I have to start with the basics, the simple brown box. 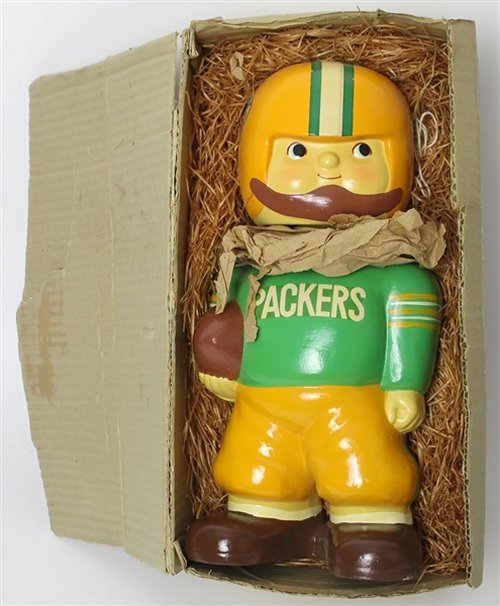 When you open the brown corrugated flap, immediately the color and gloss of the original paint illuminates from its cardboard tomb. Like a baby in a manger, the vintage, 54 year old straw provides support for the resting giant. To prevent whiplash, brown paper toweling was applied to the neck by a Japanese employee, keeping the head from bobbing on the body.

The overall paint job remains flawless, maintaining its original gloss, luster, brilliance and shine. The front helmet stipes are nearly flawless, with only two small touches of missing paint which are lightly touching each side of the front stripe, described as a very small nick at best. The face, with rosy cheeks, baby blue eyes, red smile, and brown chinstrap are flawless, absolute perfection! The green paint of the shirt, yellow pants, football, shoes, and rest of the figure are free from any noticeable flaws. The original box has preserved this figure to the highest of standards.

Although protected in its original environment, father time has still struck. On the reverse of the head, in the center of the flesh toned neck where it meets the bottom of the helmet/stripe, an original 2” hair line crack has formed. The crack extends from the very bottom of the head/neck and creeps upwards through the center of the helmet decal. The only other barely noticeable flaw is the presence of a very small hairline crack, about ½” long, which appears directly under its chin. Although these conditions were noted for accuracy, I consider this a blessing.

One thing for sure, (which we verified with a black light) is that there are no visible signs of restoration, touch up, in painting, NOTHING! This nodder is 100% original, as it left the factory, and the two noted hair line cracks document the condition of this masterpiece, and should be celebrated as it documents the originality of its survival.

Although described as a “Green Bay” football nodder, this relic has Milwaukee roots. During the 1960-1961 seasons, the Green Bay Packers played 2 and 4 games respectively at Milwaukee County Stadium. Just like their northern counterparts in Green Bay, the team sold souvenirs at their second home. Located somewhere in the concourse of County Stadium was a souvenir stand. I’m sure if you were there you would have found programs, pennants, and pinback buttons. But, to get you to purchase Nodders, a 14” promotional example was displayed, serving as a beacon for collectors to purchase the smaller, standard 6” counterparts. The large, prominent 14” nodders were not for sale and employees were under strict orders to guard these from theft, damage, or loss. Coupled with very small productions numbers, the 14” promotional nodders rarely ever surface. These just were not meant for eager Packers fans and collectors.

At some point during mid-1960s, as a token of appreciation, the rules which governed this oversized promotional nodder were waived, and with permission from her bosses, she was gifted this nodder for a job well done. The original owner simply removed the nodder from Milwaukee County Stadium and took it home, protected by its original box.

The nodder was put away, left in its box, and never put on display. Soon after, it was forgotten; The Packers won three straight championships and then faded into obscurity. Woodstock, Nixon, Disco, Pac Man and a series of other fads came and went. Time moved on, but this nodder remained protected in its original box until the early 1990s.

With disposal income and a new found obsession with collecting nodders, our consignor, a Milwaukee resident, placed an ad “Wanted to Buy Bobbing Head Dolls – Top Prices Paid” in the Milwaukee Journal newspaper. A family member of “The County Stadium Bobble Head Doll” contacted our consignor. After some haggling, a deal was struck, and the boxed behemoth found a new home.

Our consignor has a collection of over 700+ vintage nodders displayed proudly in his home. But, he made an exception with this one, and kept it safe under lock and key. It did make one public appearance, as it was featured in Tim Hunter’s book, Bobbing Head Dolls, 1960-2000.

MEARS Auctions is excited to offer this extremely rare nodder, as one collector will have the proud distinction of standing tall next to this bobbing head giant.