NOW LIVE: Boston Bruins and Columbus Blue Jackets 2019 Stanley Cup Playoffs Goal Puck Auction Ends Wednesday, May 29, 2019. 2019 Stanley Cup Playoff Goal Pucks scored by the Boston Bruins’ Patrice Bergeron and the Columbus Blue Jackets’ Artemi Panarin These are just some of the NHL Goal Pucks up for auction. How about the Series-Winning goals scored by Oliver Bjorkstrand and Marcus Johansson? 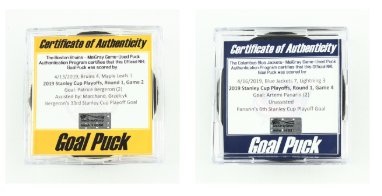 MeiGray in 2018-19 is collecting and authenticating pucks from six of our program teams: From games in Boston, Columbus, Nashville, Philadelphia, Vegas and Washington. MGG has also collected and authenticated pucks from previous seasons in Dallas, Philadelphia and New York’s Madison Square Garden. Scorers throughout the NHL, including some of the game’s greatest goal-scorers, have notched goals that MGG has authenticated, and is proud to offer for immediate bid.

Click Here for a direct link to the Auction