MeiGray Auctions Offers 7 Different Auctions in February 2017 – Highlighted by The Brophy Collection (Ends Feb. 23rd). The MeiGray Group was formed by Barry Meisel and Bob Gray, two sports memorabilia collectors from New Jersey who met in January 1997 trading game-worn hockey jerseys. We began selling game-worn jerseys to the sports-collecting public in August 1997. Most of the game-worn jerseys we offer come directly from the pro sports teams with which we sign working agreements. Bid, view and register for any of the auctions at www.meigrayauctions.com/auctionlanding.aspx.

MeiGray Auctions Introduces The John Brophy Collection
You know you’ve had a legendary professional hockey career when the Championship rings and the Commemorative awards fit nicely beside the Arrest Warrant.

The auction runs through February 23. All 43 lots come directly from the Brophy Family, Brophy, who died last spring at the age of 83, was the “Bad Man” of the Eastern Hockey League for two decades and an inspiration for the legendary movie “Slap Shot.” He became one of the winningest coaches in pro hockey history and a beloved figure who gave every day of his life to the game he loved.

He earned his most major penalty as a Charlotte Clipper in 1960, after a stick-swinging incident in Greensboro, North Carolina. Now you can own the proof of his arrest. 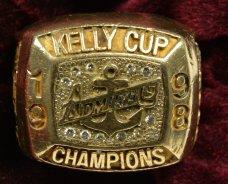 Brophy got his coaching start with the WHA’s Birmingham Bulls in 1978-79, going 32-42-6. He coached more than two full seasons with the NHL’s Toronto Maple Leafs, going 64-111-18. Brophy lived by the Conn Smythe credo, “If you can’t beat them in the alley, you can’t beat them on the ice.”

Brophy was also a key figure in black hockey history. He helped steer the careers of Val James (the NHL’s first American-born black player), and Bill Riley (the third black player in NHL history after Willie O’Ree and Mike Marson).

Brophy retired as the ECHL’s leader in regular-season games coached (882), regular-season wins (440) and seasons coaches (13). His Hampton Roads Admirals won ECHL titles in 1991, 1992, and 1998. His three titles are a league record, as are his 11 postseason appearances. Brophy’s indelible stamp on the game led the ECHL Coach of the Year Award to be named in his honor in 2003.

He was inducted into the ECHL Hall of Fame in 2009.