There are many achievements in a player’s career that can broaden his appeal and intensify demand for his memorabilia from collectors, but none equate to the impact of induction into the National Baseball Hall of Fame. Collectors have their first chance to bid on memorabilia from the Hall’s four newest inductees – Chipper Jones, Vladamir Guerrero, Jim Thome and Trevor Hoffman – in the Goldin Auctions 2018 Winter Auction through February 17, at GoldinAuctions.com.

Additionally, the auction features two items from Edgar Martinez, who fell just short this year, and is a leading candidate to be selected next year. 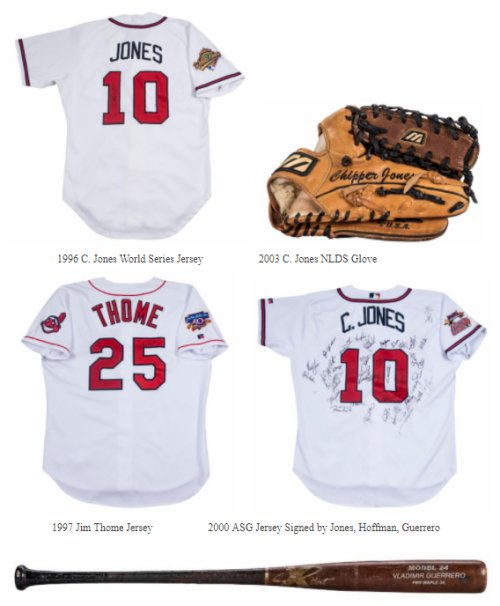 “We congratulate the players on their enshrinement,” said Ken Goldin Founder of Goldin Auctions. “Immediately following a player’s induction there is a surge in interest from collectors. It’s timely that our current auction features a 27-lot Chipper Jones Collection, a pair of Vladamir Guerrero game-used bats and four lots of Jim Thome memorabilia. There is even one item in the auction signed by Jones, Trevor Hoffman and Guerrero and another signed by Jones, Guerrero and future Hall of Famer Edgar Martinez.”

For an auction catalog, visit GoldinAuctions.com. Here’s a look at several of the lots from the new Hall of Famers.