Iconic cards from the 1930s led the way in Memory Lane’s recently completed I Own it Now catalog sale, topped by one of just nine PSA 9 copies of the 1933 Goudey Napoleon Lajoie.  The event opened in late February with collectors having the option to pull the trigger on some high grade vintage cards or wait for the five day fixed price period to end and hope they could buy it with a lower offer. Sometimes the gamble pays off and other times, a popular item is snared by the early bird. 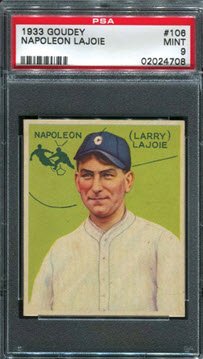 The Lajoie card was one of the big ticket items offered by the southern California-based company. Considered one of collecting’s rare gems, it wasn’t originally available to kids piecing together the 1933 Goudey set. Crafty bosses at Goudey created the scarcity in hopes kids would buy more packs to find the ‘missing number 106’. They did, but Goudey also may have underestimated the dogged nature of their customers. So many asked where card #106 was that Goudey made a Lajoie in the 1934 style after the season and sent them out to those who asked.

PSA has graded more than 62,000 1933 Goudey cards but only 79 Lajoies with only 17 of those ranking 8 or better. The card sold for an undisclosed six figure price.

In all, sales totaled more than $626,000 and the number of lots sold set a record for the I Own it Now event.

Among the other lots finding new homes via purchase or offer were a 1933 Goudey Babe Ruth #149 and a ’33 Goudey Sport Kings Ruth graded NM-MT+ as well as a 1933 Goudey #92 Lou Gehrig, graded and mint.

Twenty lots brought at least $5,000 each including:

Memory Lane is still taking consignments for its upcoming Spring Catalog Auction with hundreds of items set to go on the block but the deadline has arrived.

To consign your high grade vintage sports cards, modern rarities or memorabilia, contact them quickly at (877) 606-LANE or visit their website, where you can also register for auctions and receive free catalogs.