Photographs from the collection of one of the most important figures in 20th century American sports will enter into the marketplace this week when Memory Lane opens its 2014 Winter Auction. Athletic luminaries from Cy Young to Dizzy Dean are pictured on first generation images, some of which were captured during the most celebrated events in American sports.

The eleven photographs originated with Christy Walsh, considered the first sports agent whose high-profile clients included Babe Ruth, Lou Gehrig, Jack Dempsey and Knute Rockne. The rare and valuable photos will be among hundreds of items in the auction, which will continue through January 10 at MemoryLaneInc.com.

Consigned by Walsh Family, the photos represent some of the best items ever released by his estate. They include:

Walsh’s story is an amazing tale of perseverance, chutzpah and ahead-of-his-time talent. A writer by trade who was hoping to capitalize on America’s growing fascination with athletes, Walsh essentially stalked The Bambino until finally getting him to sign on as his first major sports client. Walsh’s efforts to lend Ruth’s name and voice to products and brands put more money into the slugger’s ever-growing bank account than he had seen before. It was Walsh’s counsel that helped get Ruth’s spendthrift ways under control. 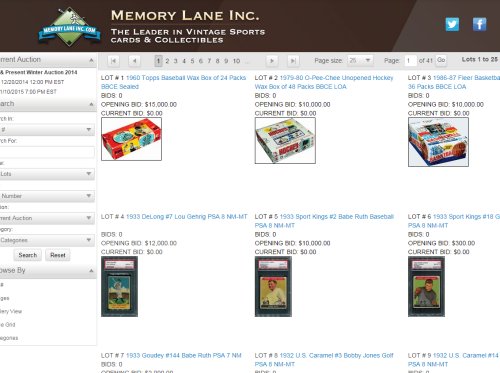 He set up writing deals for his famous clients, using ghost writers to complete the work, helped orchestrate the making of Pride of The Yankees and was instrumental in turning Notre Dame into a world famous institution because of its prowess on the gridiron.

The photos place Walsh at the center of the country’s most important sports moments during the first half of the 20th century, rubbing shoulders with athletes who are still in the public conscience today, thanks in large part to his efforts.

Comprehensive descriptions of each photograph will be available this week on the company’s website and in the full-color catalogs. To register for the auction or have a free catalog mailed to you, visit MemoryLaneInc.com or call (877)606-5263.