There are a few documents in American Baseball history that mark the dawn of new Eras in the Game, and that mark a change in Americaâ€™s view of their Sports. This Mathewson Rookie Contract, is one of them. It marks a new turn in Americaâ€™s view and attitude toward their sports and games and Heroes – Play hard but Play fair!

This play hard but play fair credo embodied in Mathewson and his Rookie Contract which marks his entry into baseball changed the Game forever by setting the table on how we want our public games played. This same credo carried over to another crisis baseball faced 19 year later with the Black Sox scandal of 1919 and anchored the principles of an iron willed man named Kennesaw Mountain Landis. Then true to Americaâ€™s roaring twenties the door opened to a new free wheeling style of hero named Babe Ruth who ushered in the â€œLong Ball Eraâ€ of baseball with a new twist on the play fair attitude — Have fun, Care about people, Play fair by the Rules, and Hit emâ€™ out of the Park!

what it stands for today. Play hard, but Play Fair!

Thatâ€™s Christy Mathewsonâ€™s legacy to our national pastime. Hang this Contract on your wall with pride for all to see. This rare and signifi cant document may be viewed online at www.memorylaneinc.com. Auction bidding is online through your computer, or by phone 877-606-LANE to register and bid.

â€œHe gripped the imagination of a country that held 100 million people and held his grip with a fi rmer hold than any man of his day or time.â€ Sportswriter, Grantland Rice. 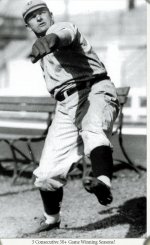 Christy Mathewson is one of the fi rst 5 players inducted into baseballâ€™s Hall of Fame. Mathewson dominated Major league pitching in the fi rst decade of the Dead Ball era of baseball like no other pitcher. A right handed pitcher with impeccable control and an easy fl uid motion. His four pitches were devastating including his famous â€œFade Awayâ€ pitch (now called a screwball). He was without a doubt, the greatest pitcher of the Deadball Eraâ€™s fi rst decade, compiling a 2.13 ERA over 17 seasons and setting the bar for other greats like Walter Johnson and Grover Alexander to follow for decades to come.

Shining Star Statistics
Mathewson is tied for 3rd all time in pitching wins with 373 and if not for a boner by a teammate Fred Merkle in a late season game in 1908, Christy would have had 374 and the 3rd place ranking all by himself. Mathewson ranks 5th all time in ERA with a paltry 2.13. He ranks 3rd all time in Shutout games with 79. He is tied for 2nd all time in 20 game winning seasons with 13 (12 of those in consecutive seasons); and he is tied for 4th in 30 game winning seasons with four. Mathewson also held the modern single season Strike out record of 267 set in 1903 for an incredible 58 years!

An Extraordinary Achievement!
And last but certainly not least in what is perhaps Mathewsonâ€™s most incredible pitching feat was in the 1905 World Series capping off what is considered the best World Series pitching performance ever by any pitcher when he pitched 3 Shutout games in a span of 6 days pitching an incredible 27 scoreless innings spreading just 14 hits over those three games, giving up but one walk, and striking out 18 with a 0.00 ERA!

â€œHe was the greatest all-around hero of the era, a handsome, college educated man who lifted the rowdy world of baseball to respectabilityâ€ – Baseball Author and Historian Tom Simon

â€œMatty Matty Send for Mattyâ€ A commonly heard chant from the crowds at the NY Giantâ€™s Polo Grounds
The Book of Baseball, PF Collier & Son, 1911

As noted, No other player was bigger than Christy Mathewson during the early 1900â€™s. With his success on the mound, his publicity and fame spread rapidly throughout America. The country recognized him as a leader and as a role model for everything good about the Game. Over the years celebrity endorsement offers poured in. Mathewson quotes were everywhere. His image was the famous icon for the ARROW Shirt man advertisements. The Giants fans and a large majority in America idolized him because again and again he saved the day in a pinch. In 1911 Mathewson along with Honus Wagner were the highest paid players in the Game. His style, his looks, his winning ways won over America and stirring statements from writers like these….

â€œIt takes a very good team to make more than two runs off Mathewson when he is right and working hard all the way. He is the nearest approach to the invincible that either League can showâ€
The Book of Baseball 1911

Mathewson was a true mass media Super Star sports hero of his time who played hard but fair. That was Mathewsonâ€™s style. He embodied the values that America wanted and prized; Be a Winner and Be principled.

MATHEWSONâ€™S FAMOUS Fade Away Pitch
â€œThe Fade Away ball, that is Mathewsonâ€™s chief reliance, is merely an indrop. He is the only fi rst class pitcher who can throw this ball with the same overhand motion as is used for other deliveries and control its direction. To get the curve, he sweeps his fi ngers across the ball horizontally at the moment of letting go. There is nothing in his whole act of delivery to betray to the batter whether the ball is to come straight or drop suddenly as it approaches the plateâ€. – The Book of Baseball 1911

A Museum Caliber, Totally One of a Kind Vintage Baseball Collectible of Historical Importance…
Â
This document is a true Showpiece that belongs behind glass.

The Rookie Contract of one of the greatest impact players in Baseballâ€™s history, Christy Mathewson; one the fi rst fi ve players elected to Baseballâ€™s Hall of Fame. An exceptional honor considering Mathewson had died ten years before the Hall even existed! This is a testimonial to the imprint Mathewson made on baseball and America. This is a document so signifi cant and rare it belongs in the Baseball Hall of Fame, or in the hands of a serious student and collector of the Game. Holding possession of this rare document is a responsibility to all collectors, and all fans of Baseball itself.

This document marks a new Attitude in America toward its sports and a new Era in professional baseball.

His presence in the game helped changed the publicâ€™s perception and their image of the Game, from a rough nâ€™ tumble, free-for-all type of game, to a more wholesome family game worthy for all. Known as Matty; Mathewson, a good looking, intelligent, and well mannered college graduate brought an air of respectability to the raucous Game. Through his talent and style of play he became a legend for playing by the rules; and for being a courteous and conscientious player, who played the game proper and fair. When the well mannered Mathewson left the Game 17 years later at the onset of World War I he had become the new baseball and professional sports role model for young boys all across America. 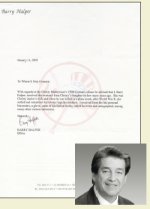 The Contract was obtained directly from Christy Mathewsonâ€™s Daughter-in-Law after Mathewsonâ€™s son died in WWII. The one and only copy was obviously an important memento to both Father and Son in surviving both of them. Baseball owes a debt to Barry Halper, the minority owner of the New York Yankees; one of the most legendary collectors of historical baseball memorabilia ever! This rare 107 year old original document with Mathewsonâ€™s own clearly written signature in black ink comes with a Letter from Halper describing the circumstances of which he acquired this precious piece of baseball history and has insured its preservation forever. Barry Halper, the Legendary Collector, saved this document for all time.