Fans will get a rare chance to hold one of Babe Ruth’s old game bats each day during the National Sports Collectors Convention July 29-August 2, 2015.  Memory Lane Auctions will have a genuine 1930 Ruth game bat at its booth inside the Donald E. Stephens Convention Center each day of the show and visitors will be able to stop by and have their picture taken with the 34 ¾”, 37.4 ounce white hickory bat ordered by Ruth.

The bat, rated PSA/DNA GU10, most recently sold at auction for over $177,000.  It was presented by Ruth to Earl Whitehill, a pitcher for the Detroit Tigers in 1931 and remained in the player’s family for decades until it was consigned to auction.

The bat will be part of an exhibit of memorabilia that will be on display inside the Memory Lane booth near the front of the show (#1001).   Fans can stop by between 11 AM and 2:30 PM daily to hold the bat and have a photograph taken.

Also on display will be the uniform Lou Gehrig wore during the 1934 MLB All-Stars Tour of Japan and the actual costume worn by Christopher Reeve in the original Superman I movie along with the kryptonite stick used during filming.  The Gehrig uniform sold for more than $500,000 in 2011.

Memory Lane will be showing off dozens of PSA graded cards and vintage memorabilia items offered for sale at the National and offering free catalogs for its Summer Break Auction which will be underway during the show and features numerous high-grade vintage set breaks.

Memory Lane will be the National’s grand opening sponsor when the show opens to the public on Wednesday, July 29 at 4 PM.

The company will also be accepting consignments for its next catalog auction during the show.  Free five-day passes to the National are available now to consignors.  Call Memory Lane (1-877-606-5263) or visit their website for more information. 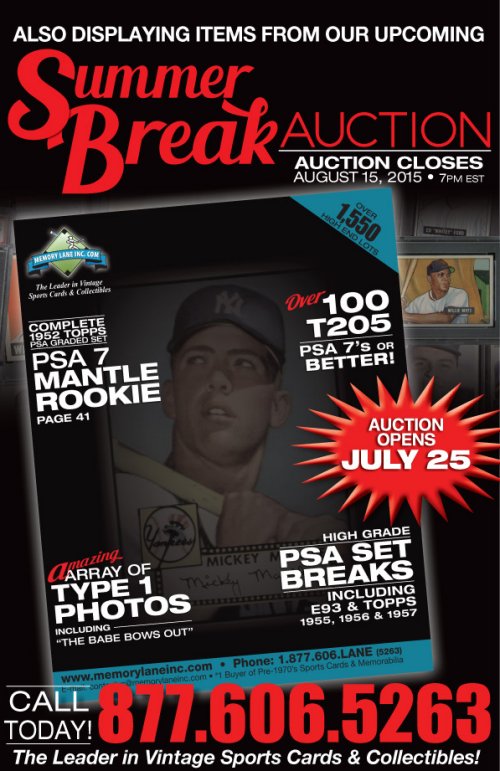