He grew up to be a dentist but in 1954, Joseph Davis was a young boy in Chicago who followed the Cubs and White Sox, played youth baseball and dreamed of being a big league player. Like the vast majority of kids his age, it wasn’t to be. He did, though, enjoy a very special summer; one that left him with memories to last a lifetime and a tangible souvenir that is now very valuable. In its winter auction next month, Memory Lane will auction Dr. Davis’ nearly pristine 1954 Brooklyn Dodgers team signed baseball that includes six members of the Baseball Hall of Fame he met in the team locker room that summer.

As an African-American youngster in the early 1950’s, prejudice was not an uncommon part of life, but the Dodgers were opening up new doors. First there was Jackie Robinson. Don Newcombe, Roy Campanella, Joe Black and Jim Gilliam were among those who followed. No matter if you aspired to be a pro in baseball or something else, dreams seemed more reachable because of what was happening in Brooklyn.

It was during those heady days that Joseph Davis went to visit his uncle, a U.S. Army colonel who worked at the Pentagon as was one of only a small number of high ranking black officers. His uncle told him upon arrival that he planned to take young Joseph to Brooklyn to watch the Dodgers in person. While details of the game are foggy some 59 years later, Davis vividly recalls his uncle’s friendship with Robinson and Campanella; a tight enough bond that the colonel and his nephew were invited into the Dodger clubhouse. 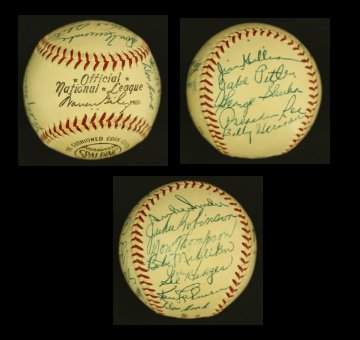 ‘Jackie Robinson took me by the hand and said ‘to commemorate this occasion, I’m going to get the team to sign this baseball’, ‘Dr. Davis remembered. Minutes later, the boy was in possession of an official National League ball signed by 22 Dodgers including six future Hall of Famers, plus Newcombe and Gilliam. It was a treasured possession and he proudly displayed it as he grew into a man.

Eventually, Davis entered the Army himself where he served as a dentist, then moved into private practice and landed in Phoenix, where in a twist of fate, Joe Black became one of his patients. After telling the former pitcher the story of the ball and learning of its value one day in 1992, Dr. Davis decided to put it in a safe. The ball had been there for over 30 years when he decided to sell. It was sent to PSA/DNA this summer where the signatures were authenticated and the ball was graded 7.5, making it one of the nicest known autographed Brooklyn Dodger balls from the golden era of New York baseball.

Many of the players and coaches whose names appear on the ball would help the Bums to their first and only World Series title in 1955.
Most of the signatures remain remarkably clear and the overall autograph grade assigned by PSA is 7.5. The ball itself was awarded an ‘8’ grade. Robinson’s name appears directly below Duke Snider’s on one panel with Gil Hodges’ signature a little further down.

The story that goes with a piece of sports memorabilia is often what makes it a truly iconic piece and this one cuts across multiple themes. While he will soon part with his baseball for good, the doctor’s memories remain.

“It’s time to give others a chance to see the ball and experience some of the same emotions I did,” he explained.

To register to bid in the auction and receive a full color catalog once they are available, visit Memory Lane’s website or call 877.606.LANE (5263).