In just over one week, Memory Lane Inc. will pull back the curtain on what could be one of the southern California-based company’s best catalogs ever.  The Historic Rarities Auction will open July 30 with 13 pages of Babe Ruth memorabilia, much of it never seen before, dozens of high end vintage sports card singles and sets, and one man’s massive collection of sports and historic autographs.  Many of the items in the auction will be available for preview at the upcoming National Sports Collectors Convention in Baltimore, birthplace of baseball’s most famous name. 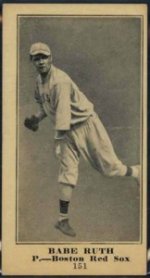 Memory Lane has spent the past several months collecting what can best be described as a treasure trove of Ruth baseball cards and memorabilia, some of it never before offered for sale, including two Ruth rookie cards (a 1916 Sporting News PSA 4 and a scarce 1916 Famous and Barr SGC 10), a 1933 Yankees team signed bat and items from the collection of The Babe’s pioneering sports agent.

“Baltimore is the perfect place to show off these incredible Babe Ruth pieces,” said Memory Lane’s J.P. Cohen.  “The show is just a few blocks from his Birthplace and Museum and you can almost trace his life through the items in this auction and see his generosity.  You can really feel the history just by looking at them.  Their stories are terrific as well.”

The collection of Ruth items is just the beginning of a large catalog event that includes high-grade vintage cards and unopened packs, autographs and other memorabilia.

The Ruth rookie card that leads off the auction carries an opening bid of $25,000.  One of the hobby’s hottest cards just now getting its due, it shows The Babe as a Red Sox pitcher, just a short time after he began his pro career as a minor leaguer in Baltimore.

There is a bat carved from an Indiana tree that was taken to Yankee Stadium in 1933 by two brothers who got 24 Yankees—including Ruth and Lou Gehrig—to sign it.  The bat will open at $10,000.

Several unique items have been consigned from the estate of Ruth’s friend, Christy Walsh, generally considered to be the first-ever sports agent including Walsh’s own 1947 World Series press box pass with signatures of Ruth, Cy Young and several other well-known players.

In addition to the Ruth rookie cards, Memory Lane will offer hundreds of scarce and high grade vintage cards from virtually every era of collecting. Another highlight is the 1909 E90—1 American Caramel Ty Cobb.  Only 116 of this particular card have ever been graded with only two higher than the PSA 7 example offered in this auction.

T206 collectors in search of the elusive T206 Sherry “Magie” error will find one offered in the Historic Rarities catalog.  Graded 2.5 by PSA, the card is one of the hobby’s most sought after and iconic specimens.  Magee’s name was quickly corrected in subsequent printings and for decades, collectors who want to own every card in “The Monster” have searched high and low for this legendary error card.  MLI is also offering the one and only T206 mint 9 Germany Schafer card with a $1,000 opening bid. 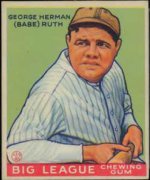 Gateway Stamp Company out of St. Louis was a prolific distributor of first day covers and the man who owns what is likely the most comprehensive, complete collection is a collector named John Oakley.  He not only collected more than 1,100 of the autographed, postmarked envelopes; he chronicled how many of each were made, whether he bought them originally signed or unsigned, values and more.  Oakley has consigned his collection to Memory Lane for this auction.  The lot, with a conservative estimated value of $30,000-$50,000 includes several U.S. presidents, astronauts, and sports stars like Michael Jordan, Mickey Mantle, Joe DiMaggio, Bear Bryant, Walter Payton, Johnny Unitas, Wilt Chamberlain, Roy Campanella, Muhammad Ali and many, many more Hall of Fame caliber personalities.

Those items are just the tip of the iceberg in the auction, which includes more than 1,300 items and will close August 18.  Bidding will be available by phone or online at MemoryLaneInc.com.

You can view the items, pick up an auction catalog and sign up to receive future catalogs during the National Sports Collectors Convention.  Memory Lane will be at booth 117B near the front door of the Baltimore Convention Center.

The company is also accepting consignments for its next I Own it Now event, scheduled for late September.

Memory Lane also has over 2,500 items available on eBay now.