Memory Lane’s 20th anniversary year is off to a strong start.  The Southern California-based company unleashed the largest auction in its history last month, with 440-page catalog featuring over 1,700 lots. When the dust settled in the wee hours of Sunday morning, a new single auction record had been established with nearly $7.6 million in sales.  The figure beat the company’s old record by more than $2 million.

Vintage cards, rare unopened material and some valuable old photographs helped drive the results, led by a few of the hobby’s most familiar icons. 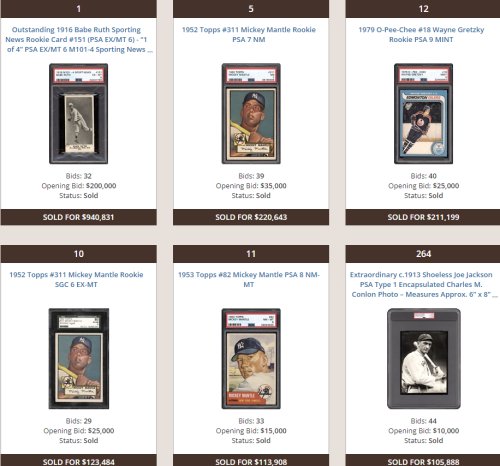 Ruth cards were sprinkled throughout the catalog including an autographed copy of one of his 1933 Goudey cards with the signature graded 6 by PSA that rocketed to $197,576. The card originated with a Boston autograph seeker who chased down over 150 different players in the set not long after they were issued in packs of gum.

Pre-War cards beyond Ruth were strong sellers, too, with a T206 Ty Cobb Red Portrait featuring a rare Polar Bear Tobacco back (PSA 5) among the highlights, bringing $24,427.

The auction included numerous lots of rare vintage photographs included a circa 1913 Charles Conlon image of Joe Jackson. The 6×8” PSA/DNA Type 1 photo opened at $10,000 but when bidding came to a close, it had realized $105,888.

Complete results and consignment opportunities for the company’s Summer Auction are available at MemoryLaneInc.com.