The greatest collection of Babe Ruth baseball cards ever assembled will be on display at this year’s National Sports Collectors Convention in Baltimore August 1-5.  The Don Spence Babe Ruth Master Collection is ranked as the finest in existence on PSA’s Set Registry.  Spence, a long-time collector of rare and vintage baseball cards and memorabilia, has pieced together a collection of over 140 Ruth cards including many of the hobby’s most elusive issues and highest graded examples. 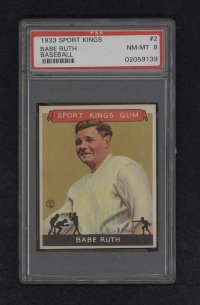 It includes everything from the 1916 Standard Biscuit and Sporting News Ruth ‘rookie cards’ to mint, PSA-graded editions of Topps’ 1962 Ruth Tribute.  Many of the rare cards in the collection from the 1910s, 20s and 30s are seldom seen at card shows or even major catalog auctions.

The display is sponsored by Memory Lane Inc., the west coast auction company through which Spence has acquired a significant portion of his collection.  Collectors who visit the Memory Lane booth during the convention can pick up a free poster/calendar showcasing the cards in the Spence Ruth Collection.

“We think Baltimore is the perfect place to showcase Don’s cards and give collectors a chance appreciate them,” said Memory Lane’s J.P. Cohen.  “The city is where Babe Ruth was born and where his career launched. We know the collection will be a great complement to the other Babe Ruth attractions that are so close to the Baltimore Convention Center.”

Memory Lane will also be launching its Aug 18th catalog auction at the National. The auction will feature a variety of vintage Ruth items including a signed glove, signed baseballs, a 1916 M101-5 Ruth rookie card, graded PSA 4 and a group of Ruth autographed items that come directly from the family of Christy Walsh, Ruth’s long-time business manager and marketing agent.  Those pieces include Walsh’s 1947 World series admittance pass used for all 4 games and signed by Ruth, Cy Young, Frank Baker and other stars, another a canceled trust check double signed by The Bambino and cashed on the very day he hit the first of his record-setting 60 home runs in 1927.

To receive the auction catalog, register to bid or to consign items to the auction, contact Memory Lane Inc. at (714) 730-0600 or visit their website.