Pieced together over decades of collecting, the world’s best collection of Willie Mays baseball cards is about to hit the auction block.  Dubbed the “Mays Fan Club Collection”, it includes some of the rarest Mays cards in existence, with many in the highest possible grades. The 282-card collection has been ranked as the best on PSA’s Set Registry since 2004 with a 92.16% completion rate and a weighted GPA of 8.07. According to Memory Lane, “this extraordinary compilation arguably resides as the finest group of individual player lots ever offered to the public.”

The owner, who left no stone unturned in his quest to acquire the best examples of each card, is offering the collection in Memory Lane Inc.’s 2019 Spring Break Auction, which is set to open March 16 and close April 6. Most of the cards will be offered individually with some small group lots also included. Bid at www.memorylaneinc.com. 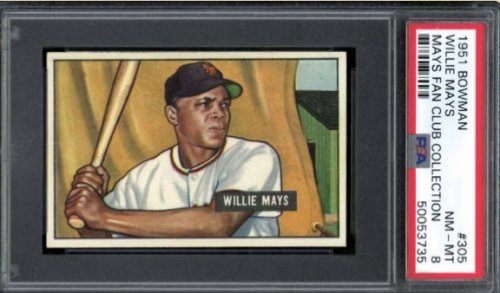 While the collection includes NM/MT (8) graded examples of Mays’ rookie card and valuable 1952 Topps issue, it is more important for the inclusion of numerous “white whales” that rarely surface for sale. Included in that group are a 1961 Topps Dice Game card (PSA 6), 1952 Coca-Cola Playing Tips test issue (PSA 6) and a 1954 Stahl-Meyer Franks card that stands as the only PSA 9 copy of any Stahl-Meyer card from 1953-1955.

The Mays section of Memory Lane’s catalog leads off with a 27-card basic set that includes all of the primary Bowman (1951, ’52, ’54, ’55) and Topps (1952 – 1973) cards issued during his career as well as a 1963 Fleer. The group includes seven cards graded PSA 10 and 16 rated 9 with 17 of the cards ranking as the highest graded examples on the PSA Registry. The 27 cards will be offered both as a group and via individual lots with the highest final bid determining the method of sale.

Information on each lot in the collection will be available inside Memory Lane’s Spring Break Auction catalog, which will include over 1,000 lots in all. To request a physical copy of the catalog, contact Memory Lane via their website or by calling (877)-606-LANE (5263).