Memory Lane Inc. will offer attendees at the upcoming National Sports Collectors Convention the opportunity to take a close look at two historic baseball uniforms once worn by a pair of baseball’s greatest icons. At its booth inside the front doors of the Baltimore Convention Center, the auction company will have on display the jersey and pants worn by Babe Ruth during his time as a coach for the Brooklyn Dodgers in 1938 and the jersey, pants and cap worn by Lou Gehrig during the 1934 MLB Tour of Japan.  Both items are being loaned for display during the five day event (August 1-5) by the collectors who own them. 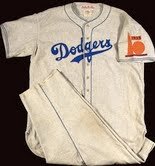 In 2008, the Ruth uniform sold at auction to a private collector for more than $300,000. The heavy gray flannel set comes from the only season the beloved Babe spent as a Dodger coach. The Spalding jersey and matching pants include Ruth’s full name chain stitched inside. The jersey carries the number 35 on the back, which is what he wore during his with the club. The jersey in its original condition, looking much like it did when the Babe wore it while coaching first base and hoping for an opportunity to manage the Yankees, which sadly, never came.

The Gehrig uniform sold at auction last year during the NSCC for $507,875, while his cap from the same tour sold for $95,600. Remarkably, just one year later, the value of the jersey alone may actually be much higher considering the recent sale of Babe Ruth’s circa 1920 Yankees jersey for $4.4 million.

Gehrig’s flannel uniform had been saved for decades by the family of a woman who was once a girlfriend of Gehrig’s. The slugger died of ALS in 1941 but the woman remained close with the Gehrig family and the uniform was given to her after Gehrig’s mother died several years later.

The Tour of Japan helped boost the already rising popularity of baseball in the Far East. Japan’s first professional baseball league would launch not long after the likes of Ruth, Gehrig, Jimmie Foxx, Charlie Gehringer and manager Connie Mack led a team of American big leaguers spent a month playing exhibition games in front of large crowds across the country.

The U.S. team assembled by Mack travelled on the Empress of Japan from Vancouver, British Columbia, arriving to adoring and curious fans who were in awe of the giant big league sluggers. Reports at the time indicated that a half million people lined the streets ten and 20 deep to greet the Americans in a welcoming parade.

It was hoped the goodwill generated by the Tour would help ease strained relations between the two nations, but seven years later, Japan would attack and a bitter, costly World War II was on.

Memory Lane will also be displaying the Don Spence Collection of vintage Babe Ruth cards at its booth and have free copies of its current 1,300+ lot catalog auction available. The catalog features numerous vintage Ruth items including a 1916 rookie card and several unique autographed items that will be sold. The auction opens Monday, July 31 at MemoryLaneInc.com and bids can be placed via the website.