There were some cards that stood out, of course—big ticket cards selling for big ticket prices. The theme of Memory Lane’s Winter Rarities Auction, though, was the strength of the market across the board. From cards issued decades ago to those featuring players who are just now at the top of their games, there were bidders vying for them. The result was an auction that had generated multiple records and over $10.6 million in sales when it all came to a close in the early morning hours of Sunday.

Not surprisingly, the three top selling items in the sale featured the king of baseball memorabilia, Babe Ruth. The highest SGC graded example of his 1916 M101-5 rookie card, a 5.5, sold for $612,000, while a recently discovered promotional banner for his 1927 movie Babe Comes Home netted $246,000 and an autographed barnstorming photo of Ruth and Lou Gehrig dating to the 1920s went for $49,620.

The one of a kind 35-3/4″ high x 119″ long banner was one of the most remarkable discoveries of Ruth memorabilia in recent years. Found by descendants of an Illinois theater owner who had tucked it away nearly 95 years ago, the long forgotten relic had been rolled up and stashed in a closet. Designed to hang inside theaters, it promoted Ruth’s appearance in a silent movie at the height of his career. 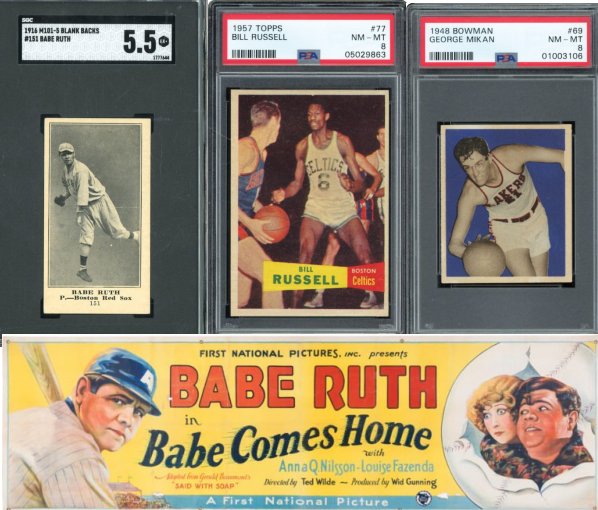 Non-sport fans chased several lots, including a rare 1940 Superman set ranked sixth on the PSA Registry. It sold for $90,199.