Over the past 20 years, they’ve sold everything from T206 Wagner cards to game-worn jerseys of current superstars, but none of the hundreds of auctions and private sale events have ever matched the size of Memory Lane’s upcoming Summer Auction.  The Southern California-based company is celebrating its anniversary with a 390-page, 1,315-lot auction (now open) and concluding on October 10, 2020. (Bid Now here).

The hot market for sports cards and memorabilia has brought hundreds of fresh consignments.  The auction will lead off with the holy grail of early basketball cards, a 1949 Bowman George Mikan rookie card graded PSA 9.  Long before Russell, Chamberlain, Abdul-Jabbar or Jordan, Mikan was the NBA’s marquee name and his rookie card is truly scarce in high grade.  The card being offered by Memory Lane is one of only four ever rated at that level or higher by PSA.  Bidding will start at $75,000.  The auction will also include the balance of the high-grade set of 1948 Bowman basketball. 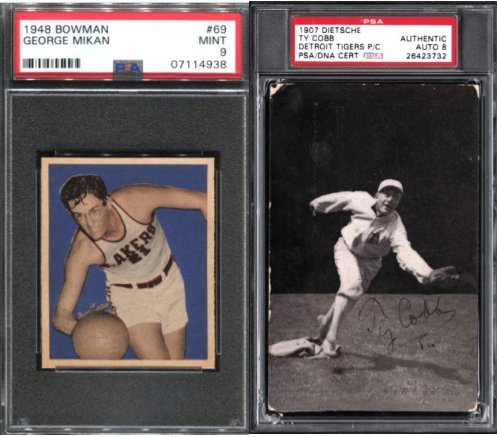 For those who prefer more modern hoops royalty, there’s a complete set of 1986-87 Fleer basketball, with each card rated PSA 10 including the Michael Jordan rookie.  All cards will be sold individually.

The auction will include numerous other high-grade accumulations including the #1-rated 1950 Bowman Football set on PSA’s Registry. It will be sold either complete or as individual lots, whichever figure is greater.

Those who appreciate vintage autographed rookie cards will see an autographed 1907 Dietsche postcard of Ty Cobb.  The only known signed example of the fielding pose image of the young phenom from Georgia, it carries a PSA 8 autograph rating.

As usual in Memory Lane catalogs, you can expect a mountain of low pop, high-grade star and rookie cards from every era of baseball.  Among the best lots:  a PSA 9 1963 Topps Pete Rose rookie, the only SGC 9 1952 Topps Jackie Robinson that currently exists and a  T206 Ty Cobb with Sovereign back that stands as the highest graded example.  Many other high-end T206 stars with various backs will also be up for grabs.

The auction also includes a fresh to market group of exceptionally rare 1912 Helmar Silks.  The lot of five includes Ty Cobb, Tris Speaker, Ed Walsh and two others, all encapsulated.

Two pieces of game-used memorabilia associated with two of the greatest athletes in sports history are expected to draw significant interest.  The first is a game-used football from Jim Brown’s historic final home game at Syracuse University, in which the 20-year-old senior ran for 197 yards and scored a jaw-dropping 43 points.  The ball originates with Al Zak, the long-time equipment manager for the Orangemen, who detailed the ball’s history in his letter of provenance.  Brown himself owns the only other game-used ball from that Saturday afternoon in the late fall of 1956.

Also up for auction is a game-used, autographed Michael Jordan bat dating to the Arizona Fall League in 1994, when Jordan was playing for the Scottsdale Scorpions.  The uncracked black bat comes from the collection of actor Tony Todd, who met Jordan after one of those games 26 years ago.

A game-used bat from early in Mike Trout’s career signed “Super Natural GU 12” on the barrel, is another featured game-used item.

Lou Gehrig more than earned his paycheck during his career with the New York Yankees and collectors will have a chance to bid on one of them. The Yankees got their money’s worth during this particular pay period.  Dated June 16, 1930 and endorsed on the back, the check dates to a time frame in which Gehrig belted six home runs.

The auction includes nearly 100 Type 1 photos including a Red Sox team image featuring a promising rookie by the name of Babe Ruth and a 1927 barnstorming photo signed by Ruth and Gehrig.   Other photos of Ruth and Gehrig, Cobb, Christy Mathewson, Jackie Robinson, Muhammad Ali and additional sports icons are part of the catalog.

The auction is scheduled to conclude on Saturday, October 10 on Memory Lane’s website.  For more information or to request a printed catalog, visit MemoryLaneInc.com or call 877-606-LANE (5263).