Three ultra-high grade baseballs signed by Babe Ruth are among the featured attractions in Memory Lane’s upcoming I Own it Now catalog sale of top end sports memorabilia.  The baseballs, which date from the late 1930’s through the final year of the baseball legend’s life, represent three of the best single-signed Ruth baseballs in the hobby. 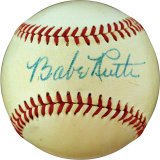 Lot #1 is an official American League ball graded NM/MT (8.5) by PSA/DNA.  Carrying a bold, blue fountain pen signature, the ball itself grades a 7 with the Ruth signature earning an elusive 9 rating.  The extra half point is for visual appeal.  Representing the elite tier of Ruth signed items, it’s priced at $87,500.

Under the terms of the private sale, investors and collectors can purchase the ball for that price (plus a 15% buyer’s premium) beginning Thursday, September 13 at noon when the sale goes live or wait until September 24 and make an offer on it (or any other item in the catalog) if it remains unsold.

The second ball is graded 8 and was signed in black fountain pen just eight days after Ruth gave his famous bear hug to a dying Lou Gehrig in the summer of 1939.  A non-official sphere with a 9/10 signature rating, it’s priced at $47,500.

The third ball is graded 7.5 and is an official AL ball that also includes a letter documenting the acquisition at an Iowa auto dealership in 1948, just weeks before the Babe died of cancer.  It’s listed at $37,000.

Two Ruth-signed hardcover books are also offered, both with PSA/DNA letters of authenticity and priced from $5,950 to $8,500.

Ruth is the centerpiece of another top lot in the sale, a 1932 U.S. Caramel set with an overall GPA of over 8.  The Ruth, Gehrig, Ty Cobb and Bobby Jones cards, all big 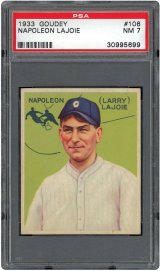 name keys, are at the NM/MT 8 level in this set, which ranks third best on the PSA Set Registry.  It will be available starting Thursday for $295,000.  A separate lot includes another Jones card, this one graded mint 9 and priced at $60,000.

Game used bats and autographed cards of Ty Cobb are in the catalog, too.  A 1921-31 Cobb model pro bat, matching Louisville Slugger factory records is available for $30,000 while someone can start their own vintage baseball memorabilia dealership with a lot of 10 Cobb-signed and PSA/DNA authenticated checks priced at $8,000.  Two other Cobb signed checks are available in individual lots. 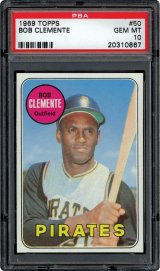 Roberto Clemente gave one of his bats to a gentleman at the 1971 World Series and collectors will see that rare piece of history go up for sale on Thursday. It’s signed on the barrel by the late superstar and carries full PSA/DNA letters with its $30,000 price tag.

Yankee fans will have a chance to own a 2000 World Series ring ($25,000) while fans of historic memorabilia will see a unique Man on the Moon photo signed by the late Neil Armstrong ($7,500).

Following the set price period, The I Own it Now event will conclude with four days of offers on unsold lots before reaching its final close on September 27 at 7 PM EST.  To receive a catalog or register to buy, contact Memory Lane via their website (http://www.memorylaneinc.com) or by phone at 877-606-5263.  The company is also accepting consignments for its Winter 2012 auction.