One of the best 1932 U.S. Caramel trading card sets ever pieced together will be up for grabs when Memory Lane Inc. opens its Spring Break Fever Auction later this week.  The online preview showcases each lot in the auction. Once bidding commences, collectors can bid online www.memorylaneinc.com, by phone at 877-606-LANE (5263)

The 32-card set consists entirely of NM/MT PSA 8 graded examples of the most popular and star-packed sets created in the pre-World War II era. The set includes Babe Ruth, Lou Gehrig, Ty Cobb, Jimmie Foxx, golf legend Bobby Jones and numerous other sports icons. Bidding will be opened on the set as well as individual cards. If the aggregate total of the single cards surpass the high bid for the set, it will be broken up and sold piece by piece. 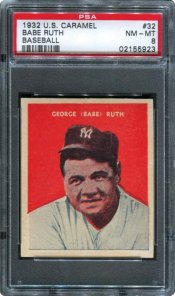 1932 U.S. Caramels are extremely difficult to find in any condition, let alone PSA 8. The company has graded only 113 Ruth cards with just 12 reaching the ‘8’ level and only two 9s. The Gehrig card is one of just eight to be graded ‘8’ with none higher. The minimum bid on the complete set is $50,000. The Ruth and Gehrig cards will open at $10,000 each.

Over 950 lots of vintage and modern era sports cards and memorabilia will be in the catalog. Bidding opens April 26 and will close Saturday, May 11 at MemoryLaneInc.com.

The auction also includes a complete T206 set (missing Wagner, Plank, Magie error and Doyle) with more than 160 graded cards in varying condition and several rare backs. The minimum bid will be $5,000.

An abundance of Ruth memorabilia can be seen in the auction preview already online including one of a scant number of baseball gloves bearing the Babe’s autograph, this one from the summer of 1947 where a young boy in Billings, MT snared it during one of the dying slugger’s last promotional trips. It carries a $3,500 minimum bid.

One Ruth lot crosses both baseball and Hollywood. It includes one of the last balls the Hall of Famer ever signed, personalized for William Bendix, the actor who portrayed him in the 1948 release of The Babe Ruth Story. The lot also contains two movie reels, eight original lobby cards from the movies, a gold brass glove holder, eight photos including one showing Babe Ruth signing the ball, programs from the movie, a photo from the United Artists Archives of Bendix at home plate in his swinging pose wearing his New York Yankees movie wardrobe and a wire photo of Babe Ruth showing Bendix how to grip a bat.

There is also a pair of original Type One photos of the Babe during his early pro career in Boston: one action shot from 1918 and the other a posed example from two years earlier.

Step back a few decades and you’ll find a circa 1911 Ty Cob Tobacco tin up for bid. Pulled many years ago from a long vacant store in Mississippi, it sat on a shelf in the consignor’s home until he began to research it and discovered the scarcity and potential value. It carries a $5,000 minimum bid. 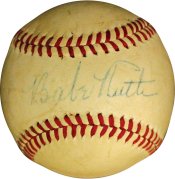 The auction includes one of the better selections of vintage unopened packs and boxes Memory Lane has ever offered including a rarely offered 1952 Topps unopened pack, graded GAI 8.5.

There is also a 1909-1911 Sweet Caporal pack from New York Factory 30 graded 7.5 by GAI, a 1967 Topps cello pack with Mantle on top grading PSA 9, unopened wax, cello and vending boxes from the 1950s-70s and unopened cello packs from 1958 Topps baseball and football, among others.

Autograph collectors will see a 1969 Syracuse Chiefs autographed baseball featuring an early signature of the late Yankee captain, Thurman Munson. Drafted the year before, Munson autographed the ball for a teammate who has consigned it to the auction. The following year he would be the first catcher to earn Rookie of the Year honors.

Joe DiMaggio and Marilyn Monroe autographed items are rarely seen on the same item but the auction will feature a cut with both ink signatures clipped from an ad for savings bonds.

There are numerous vintage signed baseballs, photographs, 3×5 index cards and cuts from Hall of Famers including Jackie Robinson, Roger Maris and dozens of other sports icons. 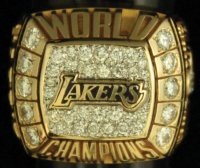 Among the unique groups of memorabilia in the auction are several pieces of high end Chicago Bulls championship jewelry ordered by Michael Jordan as gifts for teammates and friends during the team’s championship run of the 1990s. There is also a Los Angeles Lakers front office staff member’s 2000 NBA Championship ring.

The staple of Memory Lane’s auctions are its vintage sports cards, however.

In addition to the lots mentioned above, MLI will also break up an ultra-high grade 1955 Topps set including dozens of PSA 8, 8.5 or 9 graded cards and offer a huge number of mint, graded 1957 Topps including Mantle, Williams, Clemente, Aaron, Berra and both the Brooks Robinson and Don Drysdale rookie cards.

The 1914 Cracker Jack set is one of the hobby’s most valuable since it was only issued in packages of the sticky new popcorn/peanut treat but collectors will have the chance to bid on an EX graded Honus Wagner from this 99-year-old set.

The auction is also home to a 1935 National Chicle Bronko Nagurski, graded NR MT 7 by PSA. The ‘holy grail’ of football cards is on the list of virtually every vintage collector and a scant few are graded at this level or higher. The remainder of the set will also be offered, rating a very respectable 6.404. 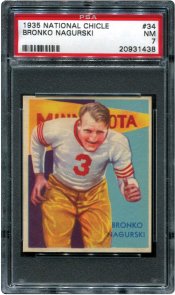 The post-War football card ‘grail’ is here too: a 1952 Bowman Large Jim Lansford graded PSA 9. One of only two to reach the mint level in the 22 years since PSA opened its doors, it is also one of the hobby’s biggest challenges for high grade set collectors. There are numerous other top shelf ’52 Bowman football in the catalog including a PSA 10 Joe Perry.

For hockey collectors, there is a card from the hobby’s ‘all-time greatest’ list: a 1951-52 Parkhurst Maurice Richard rookie card graded PSA 8.

The online preview showcases each lot in the auction. Once bidding commences, collectors can bid online (http://www.memorylaneinc.com), by phone at 877-606-LANE (5263) and even on the go via your smartphone by scanning the QR code inside the catalog.