Disputes between players and management aren’t confined to the modern era of pro sports.  Proof of that comes in a set of signed baseball documents set to hit the auction block just prior to the holidays.  Up for bids through Memory Lane Auctions will be a remarkable collection of signed documents related to the short-lived 1890s Players’ League.  The documents will be offered in separate lots detailed on Memory Lane’s website beginning December 22.   Bidding runs through Saturday, January 13.

All autographs in the collection have been authenticated by PSA/DNA. 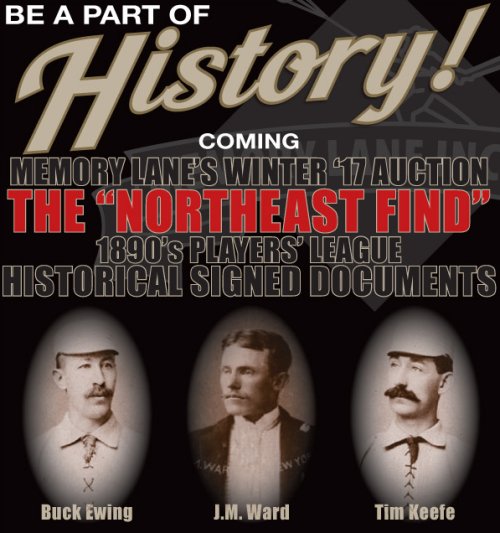 The paperwork helps document players’ attempts to, in essence, give themselves more control of the sport and its teams 117 years ago.

Dubbed as ‘The Northeast Find’, auction officials say the documents were actually found more than 25 years ago in the storage room of an empty office building in upstate New York that was being remodeled.  The original owner, a contractor who was in charge of clearing out the building, held onto the items for years but is now opting to offer them at public auction for the first time. 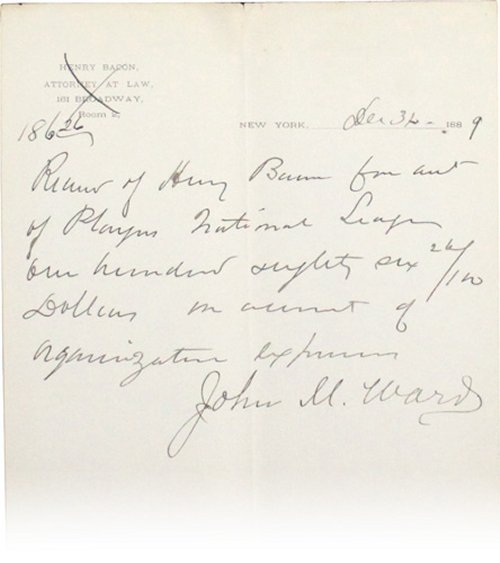 “Collecting 19th century baseball autographs is one of the toughest endeavors in the entire hobby. Not only was the practice of acquiring them uncommon, but many of the autographs signed during the period were discarded over time,” said Joe Orlando, CEO of Collectors Universe and President of PSA and PSA/DNA.  “Opportunities to add the autograph of players like Buck Ewing, Tim Keefe and John Montgomery Ward do not come around often, but the combination of their scarcity coupled with the importance of these documents makes this opportunity even more enticing for the advanced hobbyist. Content can play a significant role in the appeal of an autograph, especially when it is related to the sport that made each signer famous. The fact that these elusive signatures are connected to such historical documents takes the intrigue to a whole new level.”

There are six Keefe autographs in all, three of which will be offered in the upcoming sale, three ultra-rare notes in Ward’s hand (two presented in this auction); a Ewing signed telegram; the extensive Player’s League “Constitution” and “By-Laws”, three signed documents specifying details for team agreements with the League; and an array of construction cost related papers for Brotherhood Park (more common known as the Polo Grounds). 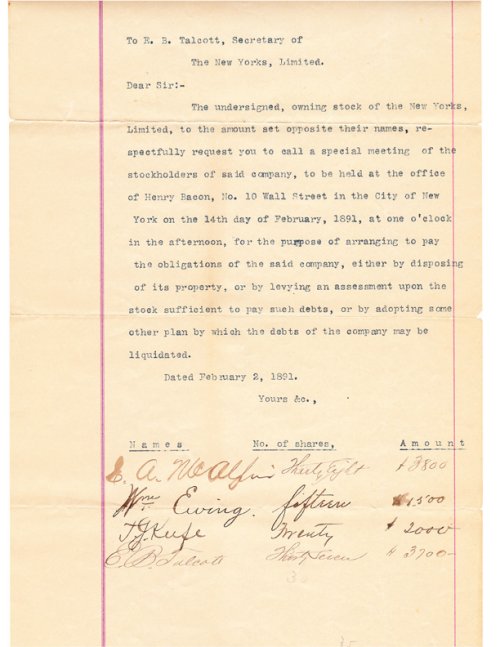 “Considering its one-of-a-kind stature, we are sure the vast array of documents presented as separate lots in this auction, will capture the hearts of a myriad of elite hobbyists,” said Memory Lane President J.P. Cohen.

The Players’ League, like many revolts, did not last long. It operated for only one year, partially due to the fact it was not funded well. Several key players left the National League to create the new Players’ League. While the league’s official name was the Players’ National League of Professional Base Ball Clubs, it was often called the Players’ League or the Brotherhood. The league was formed on December 17, 1889 with time to get things up and running for the 1890 season and included eight teams. After it folded, most teams joined other leagues or merged with other teams in other leagues. Two, the Cleveland Infants and Buffalo Bisons, were completely disbanded.

Free agency in the sport wouldn’t come about until the 1970s. However, the Players’ League was one of the first attempts to secure players’ rights in an emerging sport. And even though it wasn’t until long afterward, the League was later declared a legitimate organization by Major League Baseball.

Several interesting documents and notes are included in the collection such as:

The documents will be offered in separate lots detailed on Memory Lane’s website beginning December 22.   Bidding runs through Saturday, January 13.