The historic trophy collection of Mexico’s Greatest Tennis player of All Time, Rafael Osuna has come to the auction block at Goldin Auctions. The collection features six of Rafael Osuna’s Wimbledon and US Open Trophies during his climb to the #1 World Ranking from 1960-1963. Nicknamed “El Pelón” (The Bald), Osuna was a former world No. 1 tennis player, the most successful player in the history of Mexico and an Olympian. He was born in Mexico City, and is best remembered for his singles victory at the U.S. Open Championships in 1963, winning the 1960 and 1963 Wimbledon Doubles championships, the 1962 U.S. Open Championships doubles, and for leading Mexico to its only Davis Cup Final round appearance in 1962. In 1969 at age 30, Osuna died in a plane crash tragically.

When Mexican Airways Flight 704 crashed into the mountains near Monterrey on June 4, 1969, it claimed the lives of 79 people including a national hero and one of the greatest players to wield a tennis racket, Rafael Osuna. Several years after Osuna’s victories, during the 1969 US Open Championships at Forest Hills, two months after his death, the US Open Committee declared 28 August to be Rafael Osuna Day, honoring the memory of the former champion. This was the first time the tournament had honored a tennis player in this manner. He was later elected into the International Tennis Hall of Fame.

The trophy collection comes directly to Goldin Auctions from Mexico where it was purchased from a family member of Osuna and is the first time these items have been offered for public sale. The awards offered in the sale include his 1960 Wimbledon Doubles Winners Sterling Silver Trophy, 1961 US Open Doubles Runners-Up, 1962 US Open Doubles Champion, 1963 US Open Men’s Singles (His Only Individual Grand Slam Victory), 1963 US Open Doubles Runner-Up, and 1963 Wimbledon Doubles Winner’s Award. The total collection is estimated to bring in an excess of $200,000 and can be found at the link below. 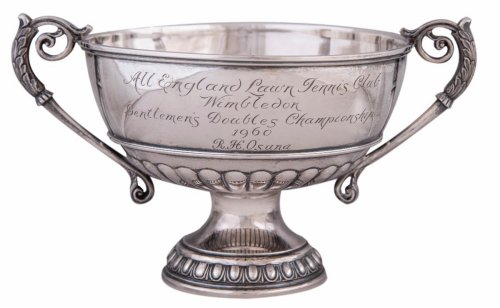