The 1992 Dream Team was the greatest basketball team ever assembled and a global phenomenon, and now Michael Jordan, Magic Johnson and Scottie Pippen signed, game-worn shoes from the team’s historic run to the gold medal are up for bid in the Lelands 2020 Spring Classic Auction, which is open for bidding and runs through June 19, 2020.

The incredible hobby fresh Dream Team sneakers, being offered for the first time, were worn by the NBA legends during the Tournament of Americas qualifying event for the 1992 Barcelona Olympics. The consignor was a Dream Team support staff member who received the sneakers directly from the players in the locker room after the tournament championship game. The Jordan shoes are the first Jordan photo-matched Dream Team items to ever be offered publicly, and the Magic shoes are photo-matched as well.

A portion of the proceeds from the sales of these sneakers will benefit COVID-19 relief efforts. 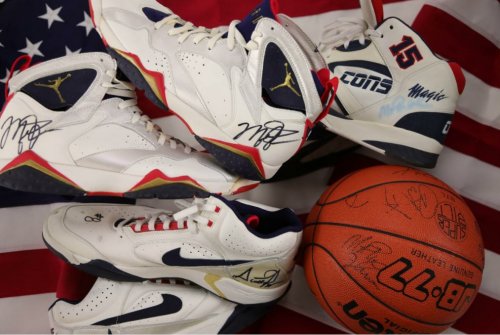 Among the additional Jordan game-used gear up for sale is a pair of 1981-82 University of North Carolina signed sneakers and a 1994 Chicago White Sox warmup jersey and Sox wristbands.

Another auction centerpiece is a remarkable Joe DiMaggio Yankees signed, game-used bat with possible World Series use. One of the finest DiMaggio bats in existence, the Hillerich & Bradsby model D29L was photo-matched to Sept. 28, 1949, one week prior to the World Series.

Another crown jewel of the auction is a Topps #311 Mickey Mantle card. This example has received a grade of EX+ 5.5 by SGC and is a true beauty.

Also featured in the auction is a treasure trove of Pittsburgh Steelers game-worn jerseys direct from the team’s archive. Among the jerseys are those by Hall of Famers and legends including Jack Lambert, Mel Blount, John Stallworth, Troy Polamalu (photo-matched to four games), Rod Woodson (photo-matched to three games) and Jerome Bettis (photo-matched to seven games including his 10,000th yard rushing game). A portion of the proceeds from the sale of Steelers Archive Jerseys will be donated to the Chuck Noll Foundation for Brain Injury Research.

The auction also sports a wide variety of impressive pop culture and historical memorabilia including George Washington locks of hair from 1799, Whitey Bulger’s prison ID and actor Tom Hanks’ full set-worn baseball uniform from “A League of Their Own.”

For more information about the Lelands Spring 2020 Auction, visit https://lelands.com/.

About Lelands
The Originals
The First Sports Memorabilia and Card Auction House in the World
Established in 1985, Lelands is the first sports auction house and the premier appraisers and authenticators in the entire sports collectible hobby. Founder Joshua Leland Evans is a pioneer in the field and acknowledged by his peers as the most knowledgeable figure in sports memorabilia. Lelands has handled many of the largest landmark auctions, achieving world-record prices for countless iconic items including Babe Ruth’s 1927 Yankees World Series ring ($2,093, 927), his 1919 “Curse of the Bambino” signed contract ($2,303,320) and a 1920 Ruth Yankees jersey ($4.5 million). For more information, visit https://lelands.com/.