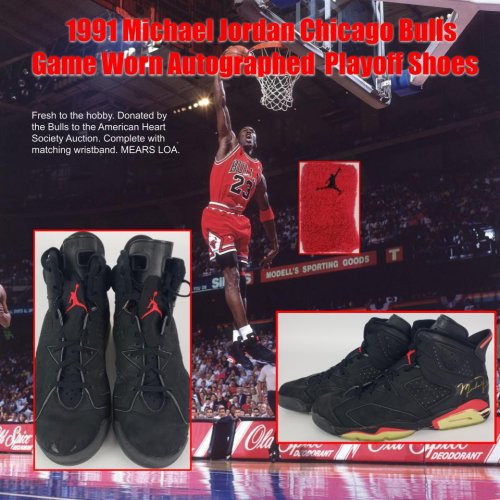 The 1990-1991 home jersey is personally autographed and has been graded a perfect A10 by MEARS Authentication. In addition, a very rare pair of 1991 Michael Jordan Chicago Bulls Air Jordan autographed game worn shoes worn during the playoff run are for sale. The design of the shoes was worn exclusively for the playoffs. A red Jumpman wristband was worn during the playoffs versus the New York Knicks and Philadelphia 76ers is included. Industry estimates predicts the shoes and jersey may sell for over $100,000 each. A pair of 1985 Michael Jordan rookie shoes recently sold for $560,000.

Items are available at www.mearsonlineauctions.com . Questions may be directed to Troy R. Kinunen at troy@mearsonline.com or call (414)-828-9990.