Michael Jordan, retired since 2003, holds more than a dozen NBA records. And late Thursday, at the end of Day One of Heritage Auctions’ three-day Spring Sports Collectible Auction, his rookie basketball card set a milestone of its own.

Jordan’s 1986 Fleer debut – graded PSA Gem Mint 10, the highest rating possible – sold for $96,000. That nearly doubles the previous highwater mark for a PSA-graded Jordan rookie set only a week ago.

Another Chicago sports star, at least until his fall from grace, also shined in Thursday’s sale: An ultra-rare 1910 T210 Old Mill card featuring Shoeless Joe Jackson sold for $492,000, the top sale during a card auction that saw scores of cards soar in value. 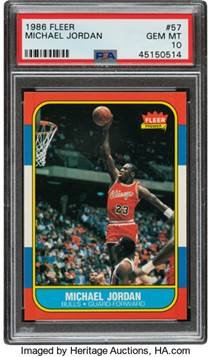 All told, Thursday night’s sale brought in $8,025,974, which toppled the pre-sale estimate of $6 million

“The card market,” said Chris Ivy, Heritage’s Director of Sports Auctions, “is as hot as I’ve ever seen it.”

That a Jordan rookie set a new PSA-graded record comes as no surprise to sports fans starved for action: In the absence of live action, Jordan has again dominated the hardwood and the nation’s TV screens as star of ESPN’s 10-part documentary The Last Dance. The series, which recounts the Chicago Bulls’ final championship season of 1997-98, has served as conversation starter and controversy maker. Each episode contains a dozen revelations; old stories have been made new headlines.

It only follows that the Jordan items in Thursday’s sale far outperformed expectations, beginning with — but by no means limited to – the Fleer rookie card.

And 36 unopened packs of 1986 PSA-Graded Fleer cards sold for $58,800 – because three Jordan stickers could be seen through the wrapping. Just one of those Jordan ’86 Fleer stickers, graded PSA Mint 9, sold separately for $4,920 Thursday night. Who knows how many of the rookie cards are tucked away behind these red-white-and-blue wax packs?

Even gear from his baseball interlude is hitting far above average: A pair of Jordan-worn cleats, dating back to his 1994 season in the sun as a Birmingham Baron, is on deck for Friday night’s sale and already sitting at $27,600.

“It is safe to say that the market for Michael Jordan has never been better than it is now, and I don’t think it’s going back,” Ivy said.

The Joe Jackson card predates his tenure as one of the Black Sox booted from pro ball for throwing the 1919 World series: Here, he was outfielder for the New Orleans Pelicans.

This card, graded SGC VG+ 3.5, is one of the hobby’s rarest finds, especially in good condition. What makes this offering even more exceptional is its backstory: This card has never before been to auction.

Until now, it was in the possession of the heirs of the Raleigh, N.C., man who originally pulled it from a cigarette pack more than a century ago. This was a so-called “lunch pail” card – given that moniker because the man who brought them to Heritage Auctions discovered it, and about 700 other century-old rarities, in his father’s law office in 2009.

The entire collection, which featured almost 600 T206 White Border tobacco cards and almost 90 T210 Old Mill cards, was stored in the container his father once used to take his lunch to work.

“Bidding continued well into the night for this special Shoeless Joe Jackson rookie card,” Ivy said. “After 110 years in the same North Carolina family, we were glad to help find it a proud new owner.”

But it wasn’t just older cards that carried the night.

Extended bidding lasted well into the wee small hours of the night – something likely to happen again Friday, when Babe Ruth’s 52nd home-run bat of the 1921 season steps up to the plate.