The highest-graded ticket stub (graded EX-MT 6 from PSA) from Michael Jordan’s NBA debut sold for $264,000 (including the 20% buyer’s premium) at Huggins & Scott Auctions December 2021 auction, breaking the record for most expensive collectible sports ticket ever sold.  The sale broke the previous record, set in October 2021, when a ticket stub from Game 3 of the 1903 (and first) World Series sold for $175,000 at Christie’s. 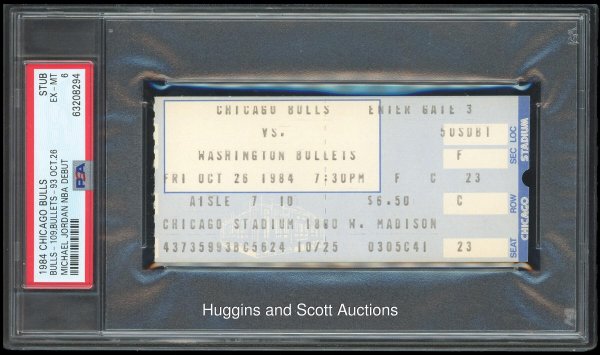 Take “Air Jordan” to new collecting heights, with this important debut ticket stub from Chicago Stadium. On 10/26/84, Michael Jordan made his first appearance in an NBA game, starting the most heralded career in basketball history. Here we have a very attractive stub from this auspicious beginning, which has been encapsulated by PSA with a grade of (EX-MT 6). This respectable designation puts this significant first game souvenir at the top of PSA’s population report, as “1/2” with none higher. Grading label notes are “1984 Chicago Bulls, Bulls – 109, Bullets – 93, Oct. 26, Michael Jordan NBA Debut”.