It has been said that baseball has more of a sense of history than any other sport. One of the gold-standard players is iconic New York Yankee slugger and outfielder Mickey Mantle, a Hall of Famer who played with a passion and aggressiveness that endeared him to millions of fans across the country and whose record-setting career made any piece of his memorabilia a must-have item for fans and collectors alike.

Shrewd collectors will have the opportunity to acquire several such items later this month at Heritage Auctions’ Platinum Night Sports Auction, including: the 1968 jersey New York Yankees legend Mickey Mantle wore (est. $700,000+) when he hit the 535th – and next-to-last – home run of his career.

“Beginnings and endings have always carried special intrigue in the collecting community, and this is a particularly nostalgic relic for the millions of Baby Boomers who consider Mickey Mantle a childhood hero,” Heritage Sports Auctions Director Chris Ivy said. “The McLain ‘gift’ so perfectly illustrates the enormous respect and adoration that ‘The Mick’ enjoyed at the end of his career. It’s also entirely possible that this was the jersey he wore as the fans at (Boston’s) Fenway Park sent him into retirement with a standing ovation Sept. 28, 1968, a week after that historic Detroit home run.” 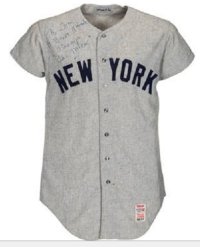 That sense of history was on display Sept. 19, 1968. Detroit Tigers ace Denny McLain was putting the finishing touches on one of the finest seasons ever authored by a Major League pitcher, a year in which he would post a gaudy 31-6 record – still the most recent season in which a pitcher has won 30 or more games – and a microscopic earned run average of just 1.96. The Tigers had a comfortable lead against the New York Yankees when Mantle headed toward the plate.

With Detroit several runs ahead, and knowing that the plate appearance would be Mantle’s last in Detroit, McLain acknowledged the Yankee legend. He approached catcher Bill Freehan – within earshot of Mantle, who was standing near home plate – and said he wanted Mantle to hit a home run.

“He was about five, six feet out in front of the plate and he says, ‘oh, let’s let him hit one – this is probably his last time (to hit) in Detroit,’” Mantle said. “Well I heard him, I heard him say that, but you never know whether to believe him or not, so when Freehan comes back by (the plate), I said, ‘did I hear what he said? He wants me to hit one?’ Freehan says ‘yeah. He’s not going to work on you – he’s just going to throw you fastballs.’”

Mantle still wasn’t sure the plan could be believed and watched McLain’s first pitch sail down the middle of the plate. The second looked just like the first, and Mantle “swung too hard” and fouled it off. But the third time was the charm for the Yankee legend, who sent McLain’s offering into the upper deck for what turned out to be the next-to-last home run of his career that culminated with him being inducted into the National Baseball Hall of Fame and Museum in 1974.

Other Yankees-related items in the auction will include, but are not limited to:

Of all of the examples that support the adage “the sum is greater than the whole of its parts,” the Thomas Jacob Archive is among the best. Some of the top items in Jacob’s trove will be available Feb. 25-26 in Heritage Auctions’ Platinum Night Sports Collectibles Catalog Auction in Dallas.

When baseball fans across the country slipped into a state of shock with the 1939 announcement that legendary New York Yankees first baseman Lou Gehrig had to retire because of his affliction with the disease that later bore his name, a young Boston-area boy sent a letter to “the Iron Horse,” asking him to sign a sheet Jacob had made on which to collect the autographs of players who had won American League Most Valuable Player awards. After receiving the letter, in which Jacob asked Gehrig to sign his name in the spots for the 1927 and 1939 awards, Gehrig wrote back but included autographs indicating he actually had won four MVP awards, and a fifth at the bottom of the hand-written letter on the back of the sheet in which he pointed out that he had won four awards (est. $40,000+). Both were right: Gehrig had won the Baseball Writers Association’s awards in 1927 and 1939, but also was honored as the AL’s top player two other times by The Sporting News. Very few autographs signed after Gehrig’s emotional retirement speech are known to exist. 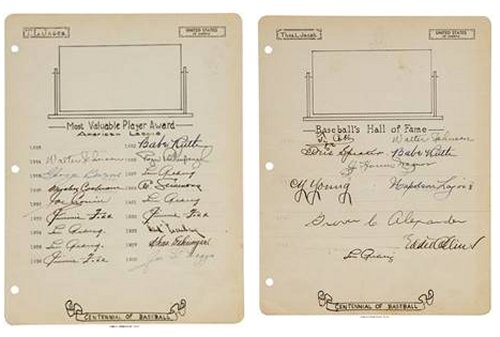 Another one of the gems in the Jacob Archive is a 1939 Baseball Hall of Fame Inaugural Class Team-Signed Sheet (est. $40,000+), which is part of a 20-page collection of autographs, the most significant of which features a list of autographs by Baseball Hall of Fame enshrinees that Jacob collected by painstakingly contacting each player through the mail. He titled the page “Baseball’s Hall of Fame” and then mailed it to the players, requesting that the players would autograph the page and then return it. The names of those whose signatures adorn the page read like a Mount Rushmore of baseball’s greatest players from the first half of the 20th century: Grover C. Alexander, Eddie Collins, Ty Cobb, Lou Gehrig, Walter Johnson, Napoleon Lajoie, Babe Ruth, Tris Speaker, Honus Wagner and Cy Young.

Very few autographs signed by the Iron Horse after his heartbreaking farewell exist in the collecting community, but those rare and important signatures represent just a small portion of the intrigue that this special archive contains.  From MVP’s to executives, from team sheets to inaugural class Hall of Fame rosters, this remarkable labor of love brings the 1939 Centennial baseball season to life unlike any collection we’ve encountered.  It’s unquestionably one of the most important autograph archives to surface in the hobby.