The Original Typescript for Mickey Spillane’s I, the Jury (New York: E.P. Dutton & Company, 1947) is expected to headline a large and important collection of items relating to the 20th-century American novelist and actor at Heritage Auctions’ 2017 Rare Books Auction March 8 in New York.

Known best for his detective novels featuring the “Mike Hammer” character, Spillane sold more than 225 million copies of his books internationally; he wrote 46 novels – 13 of which were finished by mystery writer Max Allan Collins after Spillane’s death in 2006 – and 14 short stories. His acting credits included an appearance in the Mike Hammer role, as well as the 1954 movie Ring of Fear in which he played himself. 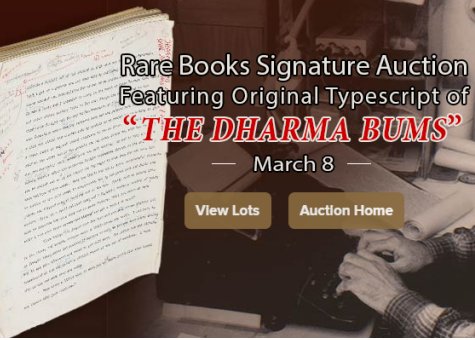 The typescript for I, the Jury, which carries a pre-auction estimate of $50,000, is Spillane’s copy with pencil marks and editing notations throughout in graphite and red pencil. The first 190 pages have three holes punched on the left margin with reinforcement labels around the holes.

Another Spillane script, the Original Typescript Manuscript and Long Galley of The Big Kill (est. $15,000), was published in New York in 1951, also by E.P. Dutton & Company. The manuscript was for what turned out to be one of four books Spillane published in a single year, preceded by My Gun is Quick, Vengeance is Mine! and One Lonely Night.

Tony Varady’s Original Painting for I, the Jury (est. $7,500), circa 1947, matted to 8-by-10 inches in a frame that measures 15-by-18.75 inches, is accompanied by the first Signet edition hardback and paperback copies of I, the Jury and comes from Spillane’s estate.

Collectors will have a chance to bid on Mickey Spillane’s Royal Manual Typewriter (est. $5,000), circa 1930, is old enough that it is believed possible that he used it when working as a comic book writer for Funnies, Inc. Spillane used a typewriter for his entire career, never making the transition to a computer.

A Group of Spillane’s World War II Relics (est. $3,000), circa 1941-45, includes an array of the author’s possessions from his time as a fighter pilot, including his dog tags, military records, photographs, buttons and pins, patches and three Bibles – one of which is signed by Spillane.

A collection of Mickey Spillane WWII Original Photographs and Army Air Force Uniforms (est. $2,000) includes roughly 100 original images of Spillane with comrades, women and several kinds of aircraft. Of particular interest are the pictures of the author with a woman believed by some to be the inspiration of the character “Velda,” the secretary in the Mike Hammer novels. The lot also includes his 1943 Greenwood Army Air Field yearbook and two tan, wool, summer-weight officer service dress tunics, trousers and two tan cotton shirts.

Other top lots include but are not limited to: