The jersey that was worn by team captain Mike Eruzione in the 1980 U.S. Men’s Olympic Hockey Team “Miracle on Ice” 4-3 victory over the dreaded and feared Soviet Union team – voted Top Sports Moment of the 20th Century by Sports Illustrated – is expected to bring more than $1 million as the centerpiece of Heritage Auctions’ Feb. 23 New York Sports Platinum Night Auction at the Fletcher-Sinclair Mansion (Ukrainian Institute of America) at 2 E. 79th Street (at 5th Ave.). 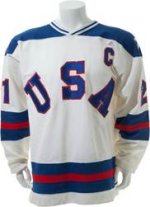 The white jersey, which is the top lot in a The Mike Eruzione Collection, is just one of 22 pieces relating to the 1980 U.S. Olympic Hockey Team and its journey through Lake Placid, NY. The trove also contains the stick that Eruzione used to score the eventual game-winning goal, the blue jersey the captain wore two days later in the gold medal game against Finland, the hockey gloves he wore throughout the entire tournament, the warm-up suit he was wearing during the medal ceremony (when he famously called his entire team up to the podium to share the moment) and many more pieces all evocative of the most famous of American sports moments.

Eruzione, who said that the materials had been kept in his U.S.A. Hockey bag in his attic in Massachusetts since the Olympics – 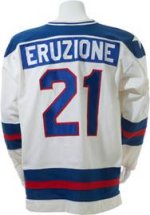 minus washing the jerseys once he got home, as they were still wet from the games – is auctioning off the material to benefit his foundation, the Winthrop Foundation – which benefits local causes in his home town of Winthrop, MA – and to provide for the his children’s and grandchildren’s futures.

“I’m auctioning these pieces off because I want to take care of my family, my charity and to turn them over to history,” he said. “They hold no nostalgia for me. I went to Lake Place Placid for one thing: to get a gold medal. I achieved that and it will never leave my possession. If my jersey can end up in a museum, or with a collector, a team or a corporation that will care for it and display the right way, then I will be happy.”

The “Miracle On Ice” is a moment that transcends sport – it was a supreme geo-political event, capping a dark American era and opening a bright new one of possibility and power.

“It’s one of those things that, for every American that saw it, they remember where they were and what they were doing when the final seconds ticked down,” said Chris Ivy, Director of Sports Auctions at Heritage. “We all heard the words ‘Do you believe in miracles?’, and on that day, Feb. 22, 1980, we all certainly did.”

Thirty three years later, almost to the day, the jersey, the stick and the gloves that Eruzione used in that game are set to become collecting royalty. The white jersey, with the bold blue and red “21” sewn on the back, is a piece of sports memorabilia unlike any other; to hold it is to be transported back to the day and the time it happened, as America needed real, accessible heroes to break the considerable doldrums of The Cold War, gas lines and a deeply sagging economy.

“As sports fans, we all have our teams and we all root for those teams to beat the other guys, whether it’s Dallas, L.A., New York or any other American city,” said Chris Ivy, Heritage’s Director of Sports Auctions, “but when it came to this Olympics and this team, they really were our team and these players – none more so than Eruzione – were our players. When Eruzione scored the go ahead goal, and the Americans held off a furious Soviet attack for the last 10 minutes of the game, every one of us was living and dying with every second.”