The catchers helmet with the letters “NYPD” emblazoned upon it and worn by Mike Piazza on September 21, 2001, during the first sporting event held in New York after 9/11 is up for bids in the Goldin Auctions 2016 Premium Live Auction at the National Sports Collectors Convention in Atlantic City on August 4. The auction, which begins online on July 11, features up to 100 lots of memorabilia valued at $10,000 or above. Additionally, the corresponding catalog auction will run through August 13 online at www.GoldinAuctions.com.

The game marked the first time in which players were allowed to wear a hat or helmet that was not associated with his respective team, thus adding to the significance of this item. Manufactured by American Baseball Cap, this size M helmet has an American Flag sticker on the right side, with the MLB logo sticker and a “PIAZZA” sticker affixed to the back. On the blue brim is another “PIAZZA” sticker with the recently elected Hall of Famer’s bold signature in silver marker. The inside of the helmet has two-inch brown padding all around the edges. The highlight of this magnificent helmet is the “NYPD” patch that was glued over the interlocking “NY” on his Mets helmet. He wore this helmet while catching the entire game. This item comes with a Letter of Authenticity from The MeiGray Group (MGA003322) with a detailed photo-match to the exact game as part of the MeiGray LOA. There is also a Steiner hologram on the underside of the brim which certifies the autograph. 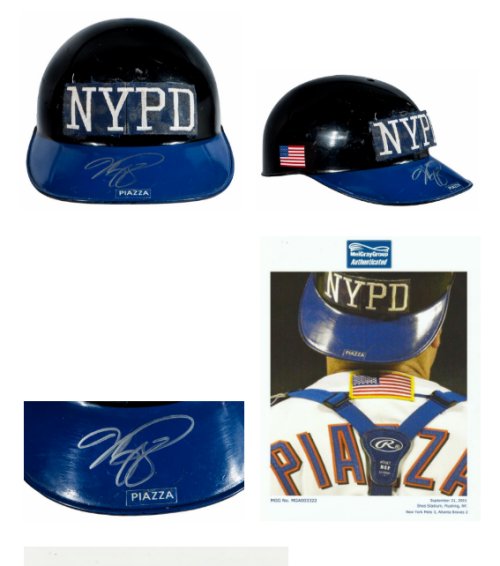 “We are very lucky to have the opportunity to share such an important piece of baseball history and at the same time support the worthwhile work of this wonderful organization that supports those affected by the events of September 11,” said Ken Goldin, Founder of Goldin Auctions. “Similar to Piazza’s jersey from that night, this helmet will forever connect fans to one of the most memorable moments in Mets history. Those who were lucky enough to be there, or view it on television will never forget it.”

Prior to being sold at auction, Piazza’s catchers helmet will be displayed at the Yogi Berra Museum and Learning Center in Little Falls, NJ from July 1-30, 2016 to allow fans and collectors the opportunity to see the historic item and relive the memorable moment. Additionally, Goldin Auctions will donate 50% of the buyer’s premium from this item to Tuesday’s Children, a NY-based 501C3 charity formed in the aftermath of September 11, 2001 that supports first responders and their families, international youth, families and communities impacted by terrorism and traumatic loss.

Baseball fans will never forget the home run that Piazza hit to give the Mets the lead and the eventual win against Atlanta that night. Trailing 2-1 in the bottom of the eighth inning, Piazza, facing an 0-1 count, hit a towering blast off of Atlanta Braves relief pitcher Steve Karsay. The crowd responded with cheers, some tears and then chants of “USA! USA! USA!”

The jersey Piazza wore on that same game was sold by Goldin Auctions for a record $365,000 in May of 2016 and will be displayed on a rotating basis at the 9/11 Memorial, the National Baseball Hall of Fame in Cooperstown and the New York Mets Hall of Fame Museum at Citi Field. Several museums have expressed interest in this item if the buyer chooses to lend it for display.

To register for the auctions or to receive a free catalog, visit www.GoldinAuctions.com.

Gotta Have Rock and Roll Presents The World Series and Sports Auction Oct. 7-16, 2020