Mike Piazza’s post-9/11 home run jersey will have a permanent home in New York. A trio of Mets fans, including Anthony Scaramucci founder and managing partner of SkyBridge Capital, Tony Lauto a retired Wall Street executive and an anonymous third party signed an agreement today to purchase the jersey in a private sale from Goldin Auctions for a record price of $365,000. The previous high price paid for a modern-day jersey was $303,277 for Kirk Gibson’s 1988 World Series jersey worn when he homered off Dennis Eckersley.

Additionally, as a stipulation of the private sale set forth by Goldin Auctions, the buyers have agreed to display the jersey in a rotating display at the National Baseball Hall of Fame in Cooperstown; the 9/11 Memorial Museum in Lower Manhattan, and at Citi Field.

“Since our inception, we have never removed any of the 20,000 items we have listed in an auction for private sale. However due to the historical significance of this item, and its emotional ties to the city of New York we made an exception,” said Ken Goldin, CEO of Goldin Auctions. “We commend the buyers for stepping forward and offering our consignor fair market value and keeping this historic piece of memorabilia in New York for the public to enjoy.”

The private sale was finalized less than 24-hours before the company’s self-imposed deadline of April 15, 2016 at 6:00 pm ET. Had it not been consummated by the deadline, Goldin Auctions would no longer have entertained private sale offers and was prepared to sell it on April 30 during its live auction at the New York Yankees Steak House in New York City. 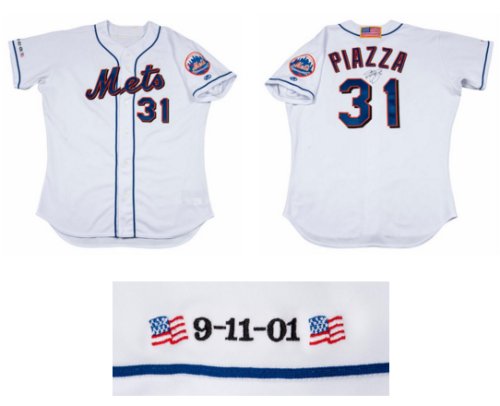 “It was a pleasure working together with Ken Goldin and Goldin Auctions to make this happen for the city of New York and to help keep the jersey where is has such strong meaning to so many people,” said Mr. Scaramucci.

The jersey was worn by Piazza during the first sporting event held in New York City after the terrorist attacks of 9-11-01. Trailing 2-1 to the rival Atlanta Braves in the eighth inning, Piazza drove a Steve Karsay pitch over the left field fence to give the Mets a 3-2 lead in what is regarded as the most memorable home run in New York Mets history. The emotion of the moment was raw for the 40,000 plus fans who erupted in chants of U-S-A, U-S-A.

The jersey had been on display in the Mets Museum at CitiField. It was consigned by a Mets fan who has owned the jersey for many years. It has an American flag patch on the back collar as well as 9-11-01 and American flags embroidered on the right sleeve. In addition, the jersey is signed by Piazza, who is being inducted into the Baseball Hall of Fame this summer.

For more information about the Piazza jersey as well as the Goldin Auctions April Premium Live Auction scheduled for April 30, and the corresponding online auction closing on May 7, visit www.goldinauctions.com.

About Goldin Auctions
Sports memorabilia impresario Ken Goldin has sold more than $600 million in memorabilia from many of the biggest names in sports, history and pop culture and was the pioneer of using the medium of television to sell sports memorabilia. Over the past few years, Goldin Auctions sold Babe Ruth’s 1918 contract for a record $1.02 million, a Honus Wagner T206 card for a public sale record $2.1 million and a 1952 Topps Mickey Mantle Rookie Card for a record $400,950. Goldin Auctions strives to break new ground and offer collectors the best in collectible treasures up for auction in the marketplace. All game worn or autographed items come with team, player, league or additional LOA from industry leading authenticators; and collectors can bid with confidence that their proxy/ceiling bids remain confidential. For more information, visitwww.goldinauctions.com.