A collection of rare memorabilia from the personal collection of Hall of Famer Mike Schmidt, including his 1979 N.L. Gold Glove Award, 1974 Sultan of Swat Crown, several milestone home run baseballs and bats, and even his Little League Baseball cap are up bids in the 2015 Goldin Auctions Summer Auction. Three of the marquee items will be sold at the Premium Live Auction on July 31, during the National Sports Collector’s Convention in Chicago, while the other 18 lots will be up for bid from July 8th through August 8th, online at www.GoldinAuctions.com.

“There was tremendous excitement for the first half of the Mike Schmidt Collection in our fall auction since it is rare for such historic items from a modern player of Schmitty’s stature to be available,” said Ken Goldin, Founder of Goldin Auctions. “The chance to once again offer this many of his historic home run baseballs, bats, awards and personal items in a single auction is thrilling for us and a rare opportunity for collectors.”

To register for the auction and receive a free catalog, visit www.GoldinAuctions.com. Some of the key items in the 21-lot collection include:

A three-time N.L. MVP Award winner and 12-time All-Star, Schmidt spent his entire 18-year career with the Phillies and is considered, by many, the greatest third basemen ever. Known for his power bat and elite defense, he hit 548 career home runs and knocked in 1,595 runs while leading the N.L. in homers eight times and in RBIs four times. His strong defense earned him 10 N.L. Gold Glove Awards. Schmidt helped lead the Phillies to the World Series title in 1980 and won the World Series MVP Award as a result. He was elected to the Baseball Hall of Fame in 1995, in his first year of eligibility. 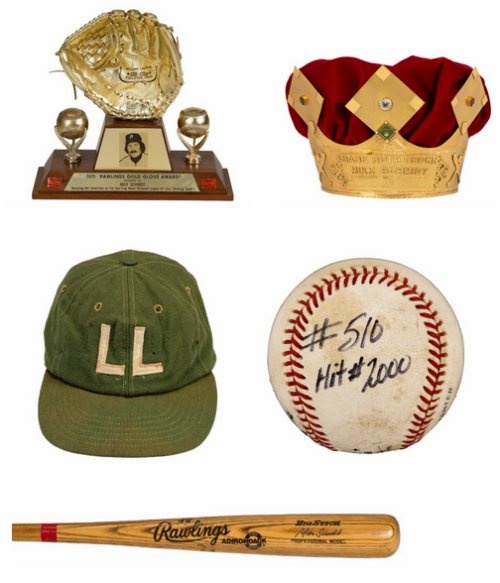 The Premium Live Auction will be held on July 31, at the Muvico 18 Theater in Rosemont, IL, located just a mile from the Donald E. Stephens Convention Center, the site of the National Sports Collector’s Convention. It will include 100 live lots of premium high-value sports memorabilia, each valued at over $10,000. Some of the other Premium Live Auction Lots are: five items from The Andre Dawson Collection including his 1987 N.L. MVP Award;1920s Babe Ruth game-used and signed bat; a 1925-32 Ruth game worn New York Yankees cap; Christy Mathewson’s 1905 World Series Game 5 bat signed by his teammates (PSA 10/MEARS 10); a 1952 Topps Mickey Mantle PSA NM-MT 8; a 1933 Goudey Nap Lajoie (PSA NM 7); a Hank Greenberg game used and signed Tigers cap; Mike Tyson’s Heavyweight Championship Belt from unifying the title; and more.