Mile High Card Co, one of the foremost auction houses in the hobby today, brings you hundreds of baseball, football, basketball, hockey and non-sport lots of the highest quality in their upcoming May 2011 auction! Over 2,000 lots to bid on including: A Babe Ruth Single Signed Inscribed Baseball, ’52 Bowman Small Complete Set #1 Current and All-Time Finest on PSA Set Registry, 1914 Cracker Jack Joe Jackson PSA 7 and much more! The Auction will run April 28 – May 19, 2011  with previewing starting on April 27, 2011. For more information about the May 2011 auction, please call MHCC at (303)840-2784 or visit their website at www.MileHighCardCo.com. Andy Madec, Managing Director of Acquisitions at MHCC will be in Philadelphia Saturday April 23rd through Sunday April 24th. He is accepting consignments BY APPOINTMENT ONLY.

You might not think of Colorado as one of the epicenters of sports memorabilia collecting. However, Centennial, Colo., is home to Mile High Card Co., which happens to be one of the best sources for high-grade vintage cards. And when the company holds one of its catalog auctions, everyone takes notice.

The latest preview is out for Mile High’s upcoming auction, to be held April 28 through May 19. However, before we dive into the company’s bread and butter – vintage cards – there are some great autographed items that need your attention.

Mile High will offer a pair of Babe Ruth single-signed baseballs, the second of which is inscribed and carries an autograph grade of PSA/DNA 6.5. Speaking of Yankees, this auction features a panoramic photo of the fabled 1927 World Series Champion New York Yankees, which featured the famous Murderer’s Row with Ruth and Lou Gehrig.

A great game-worn jersey in the auction is Stan Musial’s 1957 Cardinals jersey. In 1957, Musial led the league in hitting and finished second in the MVP award voting.

Football fans will get a kick out of a 1960s game-used Baltimore Colts jersey of Johnny Unitas. The legendary quarterback also signed the jersey on the back.

Per its usual custom, Mile High also has an extensive lineup of high-grade singles, some of which include the following:

All of this and much more is available in the Mile High auction that contains more than 2,300 lots. The sale kicks off April 28. For more information, visit www.milehighcardco.com or call (303) 840-2784. 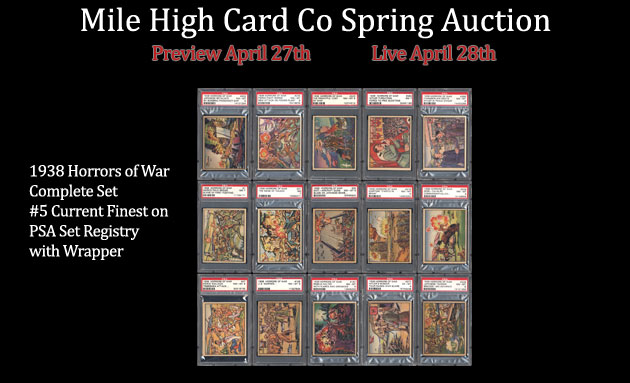 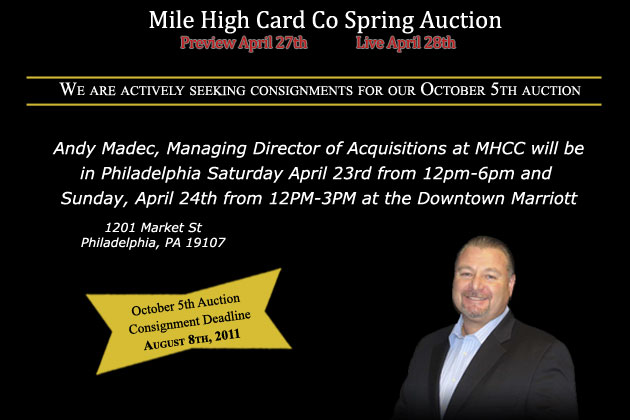 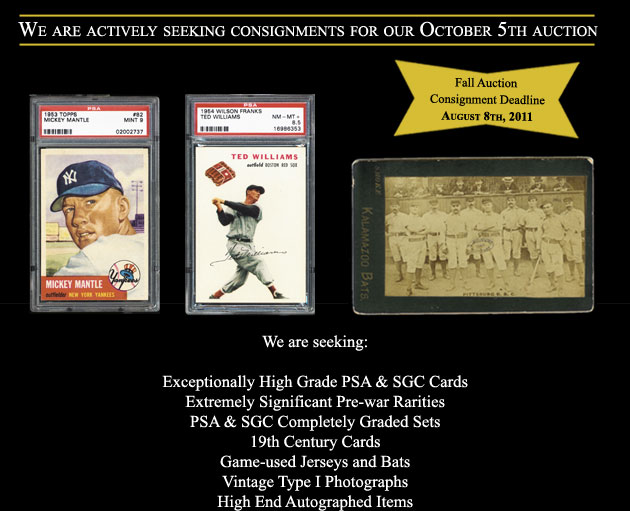