The latest premier auction event which closes in two sessions October 23rd and 24th from Colorado’s Mile High Card Company appears to be nothing short of the proverbial industry “monster,” presenting a staggering line-up of over 1700 lots consisting of the hobby’s finest high-grade sports and non-sport cards, as well as a stunning offering of high end sports memorabilia and Americana. Collectors familiar with the Centennial-based firm can expect to find the usual array of magnificent cardboard as well as memorabilia that will capture the fancy of enthusiasts from the casual to the most advanced.

MHCC Principal Brian Drent, assessed the current offerings with an excited viewpoint, noting, “as a firm, we really are pleased with the material that is being presented within this catalog and we feel that the strength of the collectibles featured is amongst the greatest we have ever offered”

To start with MHCC will close their much anticipated event over two days with the first day dedicated to its own catalog featuring a tremendous 1952 Topps Complete Set that is entirely PSA graded and offers a spectacular 7.232 overall GPA. The set will offered in a form that MHCC has utilized before presenting the set in both a complete fashion as well as breaking the set up and selling off the contents in 407 separate lots with the sale being completed to the highest aggregate bid. 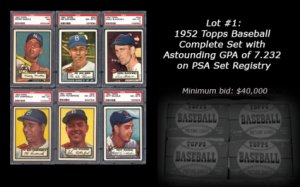 The second session will close on October 24th, and will offer nearly 1300 lots of captivating treasures many that are be offered for the first time within the hobby. While many of the items that are being featured would certainly stand on their own merits within even the most advanced of collections, the following highlights certainly deserve special mention: Offered at the starting pole position within the second catalog is the #1 Current and All-Time Finest 1948 Leaf Boxing Set that includes the Ultra Rare Rocky Graziano card, as well the auction features a stunning 1916 The Globe Stores #151 Babe Ruth Rookie card that has been graded by VG/EX+ 4.5, also offered is a captivating 1910-11 T3 Turkey Red Ty Cobb that boasts a grade of EX 5 but presents far superior to the assessed level, as well deserving of special note is a superlative 1914 Cracker Jack #68 Honus Wagner which has been reviewed at an overall assessment of NM 7, a card that will attract its fair amount of attention is a stunning 1933 Goudey #53 Babe Ruth that has been graded an awe inspiring NM/MT 8, the pre-war selection within the catalog is also buoyed by a tremendous assortment of 1933 Sport Kings which all hail from the breakup of a stunning complete set and are all offered in grades of NM/MT 8 or better!

The post-war portion of the auction is an abundant pasture of pristine cardboard highlighted by the following lots that are well deserving of special mention. Nearly 160 different exceptionally high grade 1952 Topps singles are offered in addition to the complete set offered the previous night, with names such as Robinson, Campanella, Mays and Reese all available in NM/MT 8 holders or better, As well a stunning high grade 1952 Topps #311 Mickey Mantle NM/MT 8 is offered, in addition a gleaming and attention commanding 1953 Topps #82 Mickey Mantle graded NM/MT 8 is featured, as well a offered is a terrific pristine 1969 Topps #533 Nolan Ryan that has been graded GEM MINT 10! Also deserving kudos is a terrific 1962 Topps Baseball Complete Set that rates as the #4 All Time Finest Master Set on the PSA set Registry. In addition to these remarkable single cards offered within the auction, several other highlights within the Baseball offerings are worthy of mention. Featured is an outstanding 1962 Topps Baseball Complete Master Set that ranks as the fourth All Time Finest Set on the PSA Set Registry, also featured are several noteworthy Topps test issues from the collection of a former Topps executive headlined by a stunning 1968 Topps 3D complete set with a scarce Roberto Clemente card that has been graded NM/MT 8, as well as several of the exceptionally rare 1968 Topps Plaks with a previously unknown “Sprue” of Willie Mays. 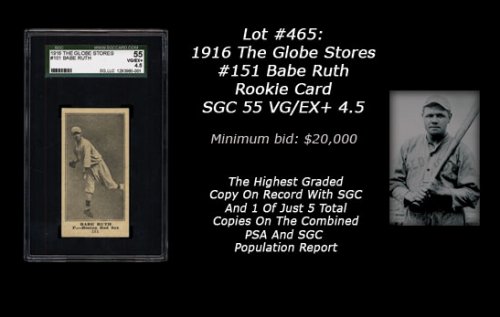 The memorabilia selection within the auction is as advanced as the MHCC has offered with over 200 lots of selected memorabilia offered in the catalog, some of the highlights include: A stunning 1912 S81 Large Premium Silk of Walter Johnson, also being offered is 1932 World Series Game 3 “Babe Ruth Famed Called Shot” Full Ticket PSA Authentic which is one of just a handful to exist in complete form, as well a terrific 1959 Roger Maris Kansas City A’s signed game used hat with MEARS And PSA/DNA LOA’s is being offered, in addition a 1932 New York Yankees World Champions Team-Signed OAL (Harridge) Ball with 22 Signatures Including Ruth and Gehrig LOA PSA/DNA, also being offered within the sale is a terrific selection of stunning high grade signed baseballs and team signed baseballs from the collection of former Major League player and current ML broadcaster Ray Fosse. 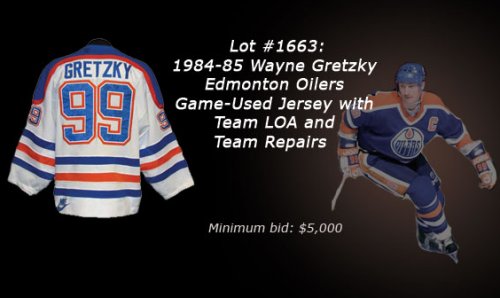 The rest of the auction is chalked full of amazing materials with several items that surely stick out and are deserving of a special mention, those include the following premium lots: An awe inspiring 1951 Parkhurst #2 Current Finest Set on PSA Registry With An Astounding 8.099 GPA, also being offered within the auction is a 1953-54 Parkhurst #27 Jean Beliveau SGC 98 GEM MINT 10, and a stunning and imagination conjuring 1984-85 Wayne Gretzky Edmonton Oilers Game-Used Jersey with Team LOA and Team Repairs, also included in this encompassing auction is a terrific 1908 Theodore Roosevelt Autographed Portrait Lithograph with an LOA by JSA.

As is always the case with a Mile High Card Company auction there is literally something for everyone, from the pre-war enthusiasts to post-war collectors, from the high-grade aficionados to collector- grade type hobbyists. According to MHCC’s Auction Coordinator Ben Gassaway, the current Mile High auction is an all- encompassing event that will satisfy many different types of collectors.

All of the aforementioned highlights as well as the rest of the over 1700 lots are available for bidding on the company’s website at www.milehighcardco.com or by contacting MHCC via telephone at (303) 840-2784. As previously mentioned all catalogs have been shipped for this auction and bidding will culminate October 23rd and 24th. Mile High Card Company is currently accepting consignments for their Winter auction (as well as all 2013 auctions) with a consignment deadline of November 19th.